I think I've shown before that I have a lot of clothes. Too many hanging ones to fit in my wardrobe, so we bought some hooks for dresses to hang on. This was fine, until the weight of the dresses caused the hooks to bend, which meant some dresses fell and it was just such a mess. So we bought some more sturdy hooks and then we've had to move all the dresses so that we can change the hooks over.

I was careful to check which dresses I still actually wanted and I chucked some straight away, mostly on to the 'selling' pile which I'll do at the beginning of September (ooh, I could do it on here in fact!). I had a pile of twelve to try on, and those with the ones which I knew I wanted took up the entirety of the back of the bedroom door and a curtain rail.

So I counted them.

And there were ninety nine.

I just don't believe I actually need 99 dresses, but I also didn't want to get rid of any, either.

There were half a dozen that still had their labels on and had never been worn, which is shameful and which I'll try to rectify immediately.

There were some that I don't wear anymore but which I wanted to keep for sentimental reasons.

And of course there were my very favourite ones, the ones that make me feel really pretty or cute or powerful when I wear them (and sometimes all three).

I've decided I'm going to write a zine about my dresses. We haven't swapped the hooks over yet, and we haven't been through my skirts and tops, which are both things we need to do soon. In the meantime, all my gorgeous dresses are on display, and I kind of like it. 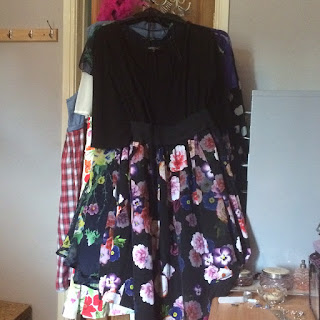 This Scarlett & Jo prom dress is one of my favourites. I love the skirt pattern. 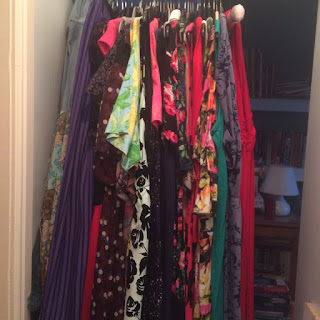 Here's 35 dresses hanging on the rail into the back bedroom (which is tiny and which is also basically a library [I also have a lot of books]).

Email ThisBlogThis!Share to TwitterShare to FacebookShare to Pinterest
Labels: wardrobe