What I Wore 26th June

26th of June was our 12th wedding anniversary, which is just ridiculous. It was a Monday, so Lee was at work, but we decided to go out for something to eat in the evening. I bought Lee a Toy Dolls album on vinyl, and he bought me a pen and some chocolates. We went to Saigon 68, a Vietnamese restaurant in Sheffield that we both really like. My mum and stepdad came and my friend Sarah and her fiance Tom came too, which was really lovely. We ate really good food - I had salt and pepper tofu and sweet and sour chicken - and brought home leftovers which is always the case because the portions are huge. Then Lee and I went to the dessert restaurant nearby and bought cake for later. It was a really nice way to spend our anniversary.

Anyway, here's what I wore. I bought this dress at the same time as I bought the grey spotted one I wore for my cousin's wedding. I know I have four dresses like this now, but I really like the style and I like the different patterns on the bottom. Plus one of them is blue which is totally different! AND! This one has pockets! Lee liked the pattern on the bottom too, so it's a win in my book :) 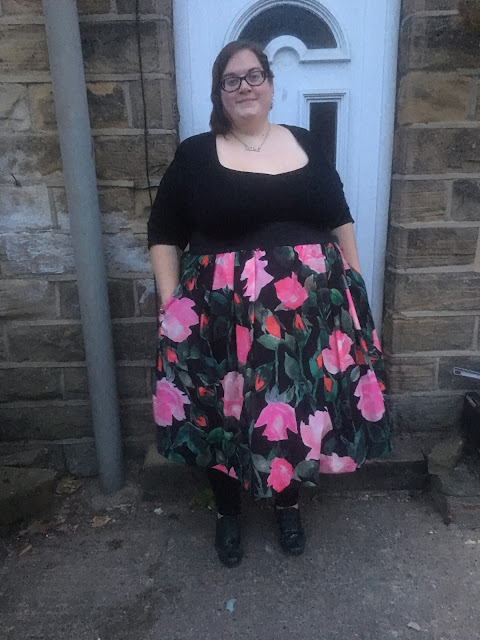 Lee said he liked the juxtaposition here of me standing in my fancy dress outside our ex miner's house in the ex pit village we live in!