On Day 3 of our camping trip we were again up bright and early due to the heat. Neil and co made drop scone pancakes, I had one with chocolate spread and banana and one with golden syrup. The heat was already ridiculous so everyone was under the awning. Some people played a card game that my mum recently bought, she liked it. I was reading my book - A Keeper by Graham Norton, which turned out to be much better than I thought - but sitting at the table being sociable with everyone else.

My cousin Peter's girlfriend Beth (his brother's wife is also called Beth, confusingly!) had been working so wasn't able to join us before lunchtime on the Sunday, so she was arriving into Bicester station. I volunteered to take him, so the two of us set off just after noon. It was so hot that the aircon in the car couldn't cope, so we ended up on the country roads with windows down singing along loudly to Fall Out Boy! It was lovely.

We picked Beth up, popped into Tesco, then went back to camp. We all had lunch - barbecue leftovers from the night before - and then it was time for tie dyeing!

I had asked my aunt ages ago if she would do some tie dyeing with me. She's done it way more often than me (I think the last time I did any was on some kind of summer activity thing run by the council when I was about ten years old), she's taught Scouts and Cubs how to do it, so I knew she was the perfect person. She suggested doing it on camp because there would be lots of outdoor space and running water, which seemed ideal. She had bought some dyes and I had a couple hanging around too, so we took all our washing up bowls to the outdoor sinks on the toilet block and got the dyes going.

Some time before camping, my uncle had seen a video on Facebook where people were doing stuff with bleach on dark coloured clothes, using leaves and things as silhouettes. My mum decided she wanted to do that, so she brought ordinary household bleach and two spray bottles, and made some silhouettes that she laminated at work. We took a black t-shirt of Lee's for him to do this.

I had so many things with me. I'd bought a few tops especially, cheap from Crazy Clearance in either white or black. My friend Sam gave me a couple of tops to tie dye for her. Plus I wanted to make some presents for friends of mine with small children, so I'd bought some sleepsuits and stuff from Primark a couple of weeks before camping. Oh and then I'd bought a new fitted sheet for Lee and I that I wanted to dye too, I thought it would look really fun on the bed and we do have a lot of ridiculous bedding. Lee promised to help me and he did.

We ended up with quite a production line! Rob's Beth dyed some shorts, Rob dyed himself a shirt. Peter had brought along a big cog from a bike, so he sprayed bleach around it on to a t-shirt which was really effective. Lee was helping me, I was just seeing what looked cool. Peter's Beth is really good at tie dyeing - she's just finished her degree in costume design, so it makes sense - and she made rainbows for herself. I asked her to do the same for me on one top and for Sam. We were at it for hours - two and a half, I think, all together. The sun was so hot, it was nice to keep putting your hands into the cold water to wash the dye off. I ended up burning my shoulder without meaning to.

We had such a lovely line of bright clothes on the deck around the toilets!

But when we went back to our tents, my uncle strung some washing line up to dry everything on, and my mum fell down the banking and rolled through some nettles. Her left hand side took the worst of it, and all up her arm and bare leg was badly nettled. She put some cream on it and sat down, and we kept getting her a cold compress for it. She said it felt like little stabbing needles all over. It really shook her up, bless her. She felt a lot better in the morning though, and the welts had gone down a lot.

In the evening Lee and I made curry. Well, we had already made it at home, so it just needed heating up and some rice making. The afternoon had really taken it out of me, though, and I was in a lot of pain and completely out of spoons, so Lee did most of it and Neil helped him. I was really grateful! We had poppadums and naans too. Everyone liked the curry - it was vegetable since Lee and I mostly eat vegetarian these days (Lee eats some chicken and tuna, but not much), but we'd put some paneer cheese in too.

It was again a really warm night, but we still set the fire going. We ended up playing Heads Up which was fun.

The next day we just packed up. It was hot, so we all had an ice lolly at about 11.30 as we were doing it. Peter was being Most Valuable Player by helping everyone, bless him. We said goodbye at around noon. I was really hungry, so Lee and I stopped at Leicester Forest services for food. I wanted to try the halloumi burger at Burger King (not bad, I think it needs two bits of halloumi myself) so we went inside, and then I got a phone call from my mum asking where we were, because they had happened to park next to us in the car park and were stopping for lunch too! They had fish and chips and we all sat together, it was unexpected but nice!

It had been a really exhausting weekend so I just relaxed all afternoon, but it was a lot of fun too. I can't wait until next year! 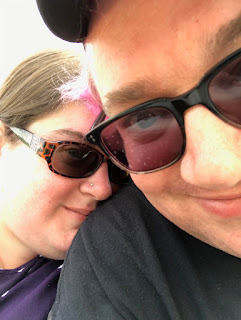 Lee and I on Sunday morning. He ended up borrowing a cap off my stepdad to try to keep from burning. I love the sun, but it was a lot 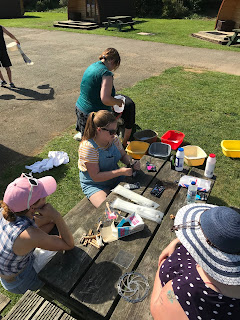 Getting set up to dye. I borrowed the hat off my aunt, I really must buy one 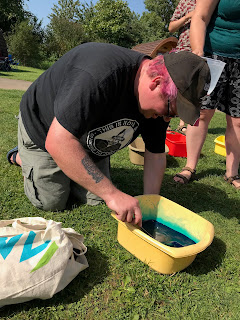 Stirring the powder with the salt needed 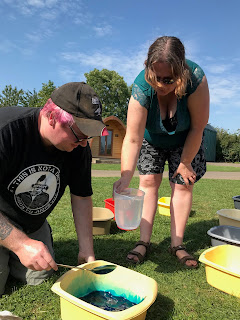 Lee was really good at this job. Not sure our spoon will ever be the same, and it took days for all the dye to come off my hands! 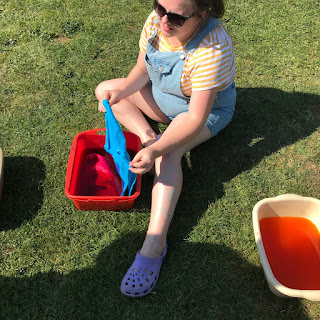 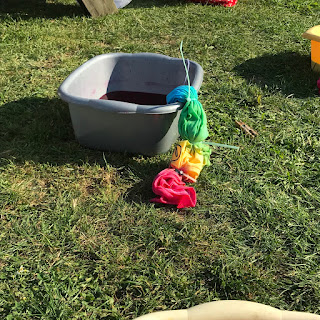 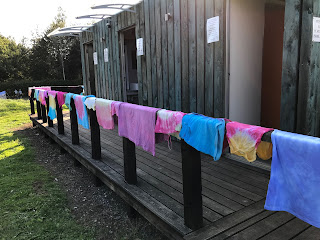 Look at that lovely line of bright clothes! I don't want to show anything too close up, but I'll try to remember to take photos when I give things to the mamas 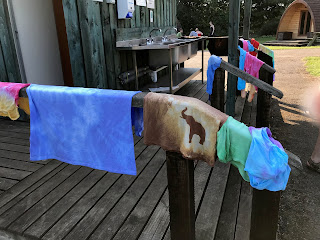 Isn't the elephant outline so cool? I'm not sure who that belonged to although I suspect my mum. The blue and purple top to the left is definitely mine - it was a top that I had stained and kept aside for dyeing 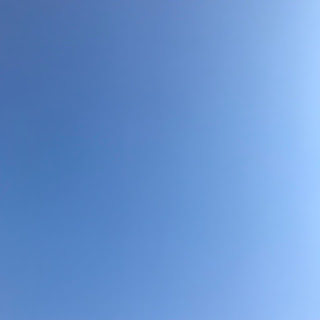 There was not one cloud in the whole entire sky. It was a lovely weekend for weather, but I think 32 was pushing it a bit 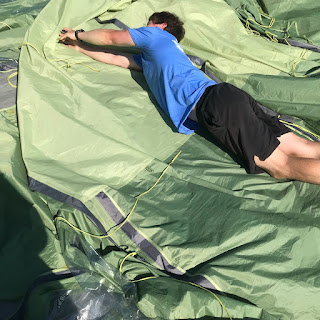 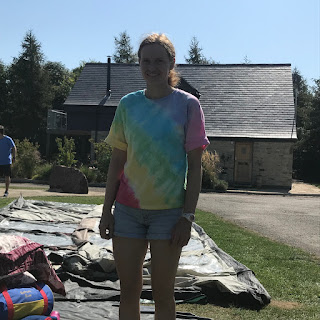 And lastly here's his Beth showing off her rainbow top the next day, isn't it perfect?