What I Wore 1st September

As I said, we went to the theatre in York at the beginning of September, and I debuted the top that my mum had bleached for me the weekend before when we did all the tie dyeing at camping. My mum was really good at the bleaching so I left her to it as I was doing the dyeing.

As I said, my cousin Peter had brought this cog off a bike with him to use. He did his first, spraying bleach over the cog and leaving it until he was happy with the shade that the bleach bleached the fabric to. I think he went quite white with his. I liked the effect so much that I asked my mum to do one for me.

The top was a basic one from Simply Be, I bought a bunch and they were all under £10. My mum sprayed the bleach - she said it was better to spray the air for a bit to make sure the bottle wasn't clogged, and then move towards the cloth.

I washed the bleach off when the fabric had faded to this coppery colour, because I thought that was quite cool. I love the effect, I really do. I like the bigger spots of bleach, too. I wore the top to the theatre tucked into this skirt that I am wearing a lot at the moment.

These leggings are from Simply Be and the seam on the right leg is twisted somehow, meaning that when I wear them they end up looking twisted like this. It's fine but kind of annoying!

I will definitely do more tie dyeing and bleaching in the future, because the effects are really good and I like wearing something unique. 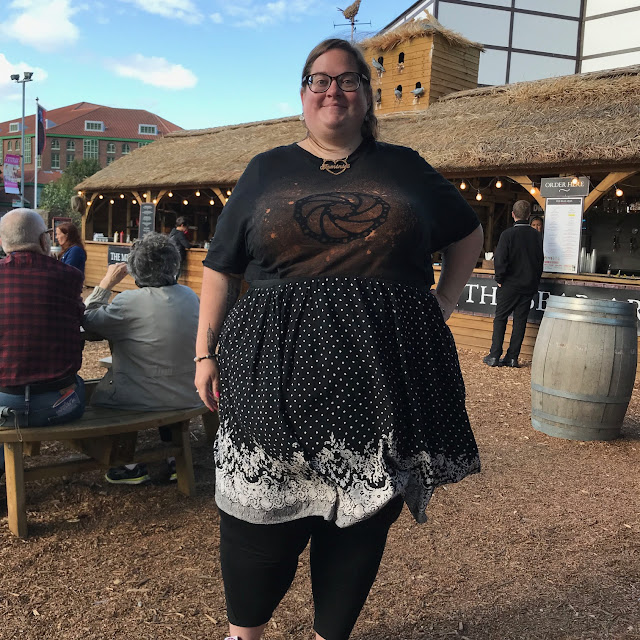 Email ThisBlogThis!Share to TwitterShare to FacebookShare to Pinterest
Labels: handmade, scarlett and jo, simply be