The weekend after Easter was a pretty chilled one for Lee and I. On the Friday night we had a takeaway curry, on Saturday we did some jobs and I stuck some zine flats together. I went to see Tez Ilyas in Bradford on the Saturday night with Sam. We saw him support Josie Long in February and liked him so thought we'd see him on his own. He was really good, I'd really recommend checking him out.

Anyway on the Sunday Lee and I had a run out to Yummy Yorkshire. It isn't far from our house and I drive past it all the time, but I've only ever been a couple of times before. Lee had never been but he's a big fan of ice cream so I knew he'd like it.

Now last time I went, around this time last year, it was just a cafe, with around ten tables, and a counter selling ice creams. They've refurbished since then and it's huge, with a proper restaurant. We arrived about 11.20 as we'd been into town, and got a table straight away in the window. The breakfast menu is on until 11.30am so we ordered before that. Lee chose a veggie breakfast and I chose Eggs Royale - Eggs Benedict with smoked salmon, on potato rostis. They also had Fentiman's drinks which I love so I had the dandelion and burdock one.

The lunch food menu looked really good too, so I'd like to go back and test out a burger or a fish fingers sandwich. The prices are pretty ordinary pub prices; my breakfast was around £7. Everything is homemade and cooked to order so we waited around half an hour, but it was worth it.

For dessert, Lee had a chocolate fudge sundae and I had a salted caramel sundae. We were surprised they were served on plates but they looked spectacular and tasted just as good! We paid £33 for two courses and three drinks, which seemed fair for such a nice place and homecooked food.

There were plenty of people there so it's not hard to see why they needed to make the place bigger. You can still just buy ice creams, and they also sell raw milk. There's a shed where you can look at the cows and other stuff for children. It's a really fun day out in this part of Yorkshire! 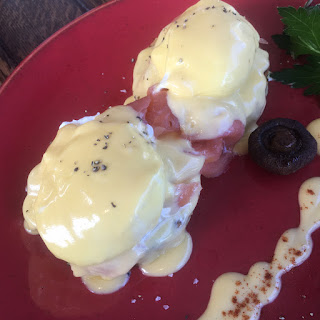 Eggs Royale is one of my favourites, and this didn't have too much hollandaise sauce 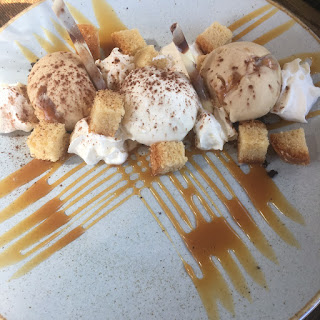 Vanilla ice cream in the middle and salted caramel on the outsides. It was really nice and salty!

Email ThisBlogThis!Share to TwitterShare to FacebookShare to Pinterest
Labels: day out, yorkshire