The last two weeks of January has a lot of birthdays in my family. I'm the 19th, my dad was the 23rd, my uncle Neil is the 25th, and my cousin Rob is the 1st of February. This year, my uncle turned 50 and my cousin turned 21 within a week of each other, so they had a joint celebration with us the last weekend in January.

We went to a hotel near my mum's house in Wakefield for afternoon tea for lunch and then swimming in their pool. Now, I've been there a couple of times before and the woman who works there is really horrible and incredibly patronising - it's like she thinks you've never used a swimming pool before! We ended up complaining about her to the front desk because there's just no need!

However, we still all had a really nice time swimming and sitting in the jacuzzi. Here we are having lunch 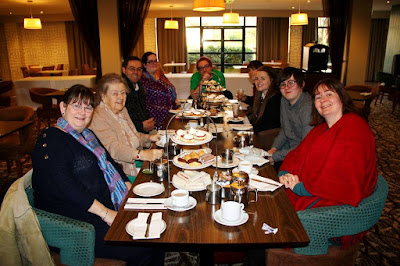 There is, from left to right, my mum, my grandma, Neil, me (suffering from a horrible throat infection and feeling ropey), Lee, Peter, Beth, Rob, and my aunt Caroline. The lunch was nice - I was finding it difficult to eat due to aforementioned throat infection!

In the evening we went to Mezzaluna in Mapplewell, not far from where we live in Barnsley. It's rated as the second best restaurant in Barnsley on TripAdvisor so we gave it a go. I have to say - I was impressed. It's very funky inside, the food was delicious, the portions were huge, the cocktails were yummy, and the staff were kind and friendly. Rob and I shared some mussels (I can't eat a whole portion) and they tasted really fresh and good. I had salmon and prawn linguine for my main course and it was rich and creamy. I don't think anyone disliked their food, which to say there were twelve of us is pretty good going! I'll definitely go back there another time.

Here's Neil and Rob drinking some of those yummy cocktails: 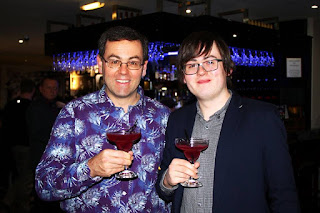 The wall had photos of Italian American actors - I'm a bit partial to Al Pacino so got my stepdad to take these photos! 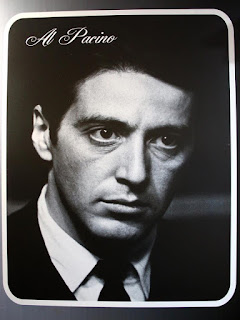 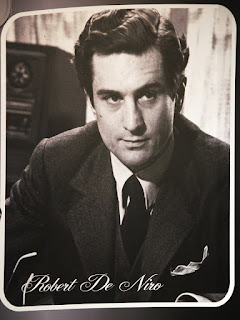 Here we all are at the table, taken by my stepdad too. We were slightly squashed on to three tables but given how busy the restaurant was it seemed fair enough. 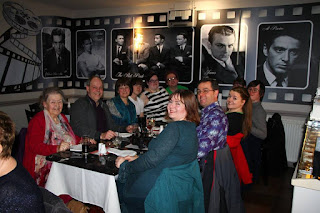 Here's Lee and I. I was wearing a cardigan but it was so hot! 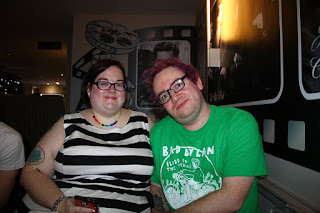 We didn't have dessert in Mezzaluna because Beth had made cakes for Neil and Rob, so instead everyone came back to ours to eat them there.

Neil is a Scout leader so she made this: 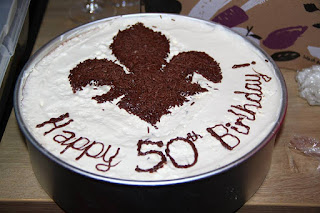 Rob likes BB-8 and Star Wars so she made this! Isn't is fantastic? 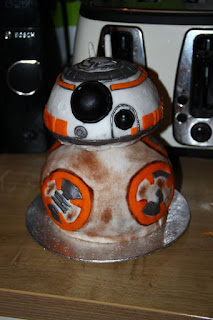 All in all, it was a really good day - I just wish I'd not been so ill!