The Great Gatsby in York - January

My friend Jacqui bought tickets for her and our friend Sam and I to see The Great Gatsby in an "immersive" theatre experience, for which 20s dress was encouraged. It was on the first Saturday in January which was a great excuse for us to get together and drink wine. We got ready at Jacqui's, then got a taxi to the theatre where it was held, all dressed up in new dresses and headbands.

We got a drink each. There were a lot of people there. Jacqui saw this with her sister before Christmas and said there were only around 30 people there then, but at ours there was at least twice that. Most people were dressed up and looked fabulous. Members of the cast started circulating through the crowds, asking us if we'd ever met Gatsby and whether we knew how he made his money - we were part of it, you see, and supposed to be guests at the party.

As things progressed, different cast members kept taking off parts of the audience to different rooms. We went with Nick and Daisy to a lounge area to play cards and talk about first love, then we went to Daisy's bedroom a lot, then a tiny room where she kissed Gatsby a lot, and so on. It was really fun! At one point Tom shouted at me, asking why I was lying about where Daisy had been, but the more you put into it the funner it was. I would definitely see something similar again, and even this again because obviously I could watch different bits. If you get chance to see something like this, jump at it! Selfie I took before we set off. 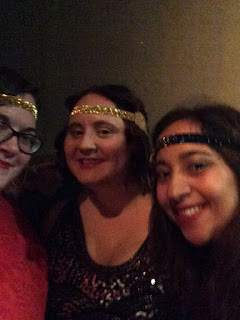 Just before it started, as we were waiting for things to kick off. I didn't get a full picture of my dress, but it was from Simply Be and is lacy, I bought it especially for this occasion as it's not my typical kind of thing at all! I probably will wear it for another special occasion though. 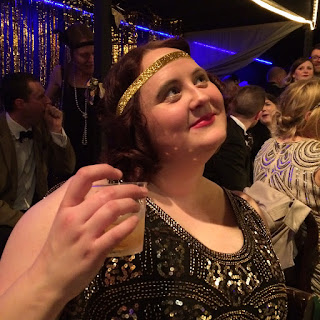 Here's Jacqui with her whiskey - we felt we needed a whiskey each to be in keeping with the era, even though none of us actually like it! 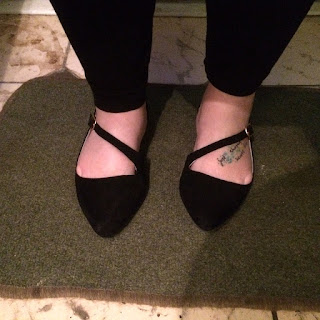 And finally here are my new shoes. I bought them from Simply Be in the sale, I think they were around £5. They're fake suede and very comfortable!
Posted by Rebecca at Saturday, February 04, 2017