I watched ten films in January, which is well on the way to breaking last year's record of 100 films! Six films were new to me, too.

1) The Commitments - I love this film. It's feel good and funny.
2) Who Took Johnny - I saw this discussed somewhere, it's a documentary about a kid who went missing in the 80s (and whose disappearance led to Missing pictures on the side of milk cartons). It was really interesting.
3) Philadelphia - This is one of my favourite films, even though I don't really like Tom Hanks. It's about a man fired because his bosses realised he had Aids, so watch it if you've never seen it.

4) The Great Gatsby - After seeing the theatre thingy in January, I thought I'd watch the film. It is really pretty, but it was way overly long, and I felt there wasn't enough Leonardo in it for my liking
5) Star Wars/A New Hope - Lee wanted to watch this since we'd seen Rogue One over Christmas. I love it, but lord Luke Skywalker is a whiny child. I much prefer The Empire Strikes Back (which by the time we've read this, we'll probably have watched in February)
6) Worried About the Boy - I don't remember where I saw about this, but I was intrigued. It's about Boy George and starts when he moves to London to live in a squat with Marilyn. It's really good and the music is too.

7) In the Name of the Father - Again I'd been reading something about the IRA and the Guildford Four and thought that I really should see this film. It's, understandably, really hard going. It's really long too, so I watched it in two halves. Daniel Day Lewis and Pete Postlethwaite are both excellent.
8) Carol - I'd heard loads of hype about this film so decided to watch it. It's very gentle and sweet, I would recommend it
9) Almost Famous - This is another of my favourite films. I went through a phase of watching it all the time, but it had been a while. It's still excellent. I love Kate Hudson the best 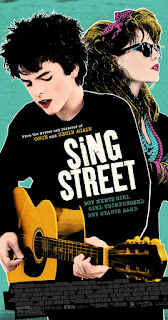 10) Sing Street - Someone on Tumblr recommended this and I'm so glad they did. It's set in Dublin in the 80s and is about a kid who forms a band at school. Watch it, it's so funny and the music is brilliant.
Posted by Rebecca at Tuesday, February 28, 2017