My mum's birthday itself was Sunday the 27th of May and she had a big party planned at her church after the service. She and the rest of my family went off to church, while Lee and I stayed at home and then went to meet everyone about 12.30. Some people had stuck around after church so it was a bit of a picnic! The bouncy castle arrived and the face painting lady arrived, and the church cafe was open to do tea, coffee, scones, and cake, because that's what my mum wanted. The kitchen head, Frank, did really well and I'm glad she decided to do that.

People started arriving from around 1.30pm and the kids were all over the bouncy castle. Lee's mam, stepdad, one of his brothers, and his friend Paul all came down together in one car so it was lovely to see them. Tons of my mum's friends came, some from really far away! One of her cousins came, and his son and grandson, who I hadn't yet met, so that was really lovely. I think there was around a hundred people there!

I had asked my mum's sister and my uncle to give a short speech each because I knew my mum would like it, and if I gave one too. I thought about asking my stepdad, but he was really stressed when he had to give a speech at their wedding, so I thought he wouldn't mind if I didn't ask. We rounded everyone into the main church area and I went first.

I thanked people for coming, and then I told everyone about some things that my mum is, including being a very good bookkeeper and dressmaker. Everyone laughed and applauded me, and I got very choked up but managed to not cry! Caroline went next and she said lovely things about being good friends with my mum as well as her sister, and then Neil went last. He and my mum are very close too. My mum then said something really briefly but we had sprung it on her because I wasn't sure she would agree! I was really nervous but proud of myself for doing it.

I had my face painted with flowers and glitter, the lady was a friend of a friend and she was so friendly and also really talented. She did loads of faces and arms and had unicorn horns and flashing lights and all kinds of things! I'd recommend her so if you need a facepainter hit me up. My mum was really pleased she'd had a facepainter and the bouncy castle.

We all left the church at about 5pm and went to my mum's. She opened some of her presents (so much alcohol!). There were 17 of us left by this point so we all went to a nearby pub for tea. I was sitting with my godmother, Lee, my cousin Peter, my second cousin Ben, his son, and his girlfriend. It's ages since we've seen Ben so it was really nice. I had a burger with halloumi in, and chocolate cake with ice cream. The pub, the Dam Inn at Newmillerdam in Wakefield, has recently been refurbished and it's really nice if you're in the area.

After that we went back to my mum's, getting fewer in number as people left. She opened her presents and Lee and I didn't leave hers until after 1am! It was a long day but I know my mum really enjoyed herself and that was the main thing.

Here's my photos of the day plus some I stole off Facebook: 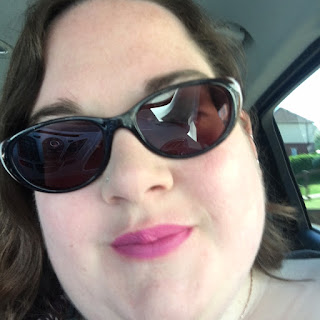 On our way! This lipstick is from Models Own and it's semi matte and utterly gorgeous 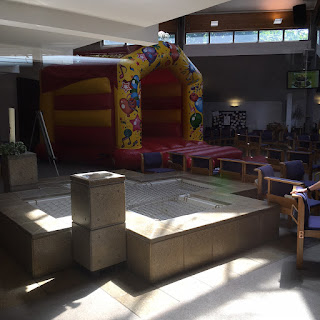 Have you ever seen a bouncy castle in front of a baptismal? 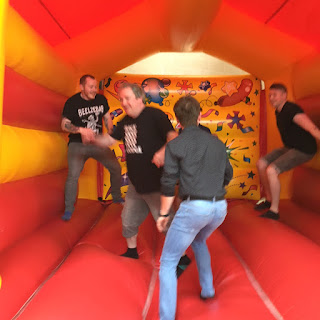 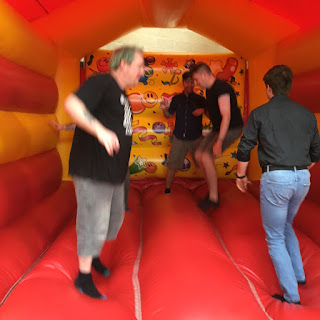 Lots of bouncing going on 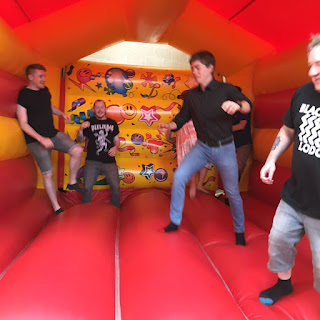 Just as Peter was about to do a forward flip 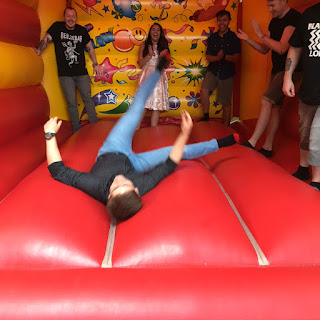 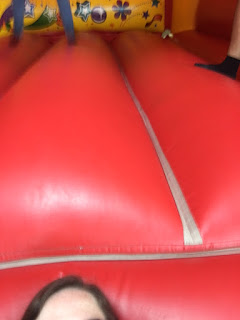 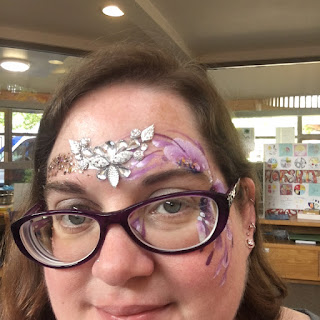 My face painting! The bit in the middle is a sticker and I had to take it off because it was itching me. The right hand side is pure glitter and it kept falling off me in huge bits, I think I'm still covered in it now 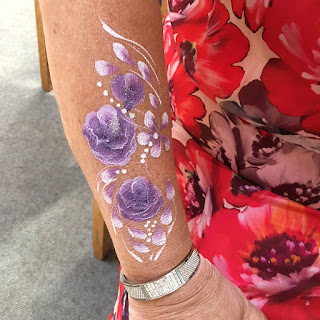 My mum's arm painting and a bit of her dress, which she made herself! 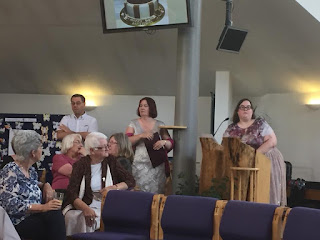 Me giving my speech! Lisa took this photo. We had to stand at the lectern to use the microphone there but it did look a bit like we were giving the sermon 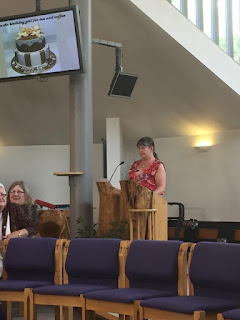 My mum saying thank you 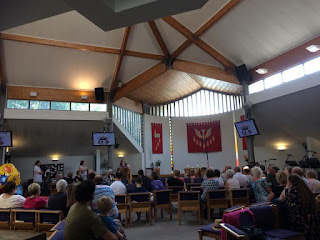 And this is Sarah's photo from the back of the church so you can see most of the people there! So many!