I've been meaning to go to Hathersage Lido for about four years. Located in Derbyshire just on the south west of Sheffield, it's about 45 minutes away from our house across the tops, and I've got quite a few friends who've been before, so I've always wanted to make a trip and go. I mentioned it to Lee, who was off work the last week in May, so we said we'd go on the Friday. Only the weather was forecast to be rainy, so we weren't sure if we'd be able to go, but I said we should go there anyway and have a nice lunch out. Anyway, when we woke up it was hazy but sunny, so we set off.

The public session starts at 10.30 on a Friday, so we set off about 9.30 from our house. We've been near Hathersage camping so we sort of knew the way, and we had a nice drive down. We arrived about 10.20 and joined a queue - there were about 20 people ahead of us. The pool does have a capacity so I'd recommend getting there early in case it's really busy. There's quite a few changing rooms, so Lee and I got changed and then stashed all our stuff in two lockers.

The pool is heated, so it felt warm enough to get into. It's quite big, but it gets deep quite quickly so we had to hang on to the side a lot when we swam to the deep end. There was a rope down the length so people could lane swim, which is good if you want a proper swim, but Lee and I stayed in the other part. There were quite a few kids in, but not too many and we still had a lovely swim.

We stayed in until about noon, by which time I was just about to get cold. The sun was peeking through the clouds and we both definitely caught the sun, but I was at the point where I was beginning to feel chilly. On another day I would have sunbathed for a bit, but instead we each had a shower (there aren't many showers, so I was glad we'd got out before the cut off and everyone got out) and got dry.

We went into Hathersage for lunch, stopping at a pub called the Scotsman's Pack. The food was really nice - freshly prepared and delicious. I had a halloumi, avocado, and beetroot hummus salad, and Lee had vegetarian sausages and mash. I'd wanted some local ice cream so I was glad they had loads of flavours. I had salted caramel and double chocolate, and Lee had a chocolate brownie with mint choc chip ice cream.

We will definitely go swimming there again some time, it's utterly worth it if you're nearby. I don't think I've ever been to a lido before but I'd go to another! 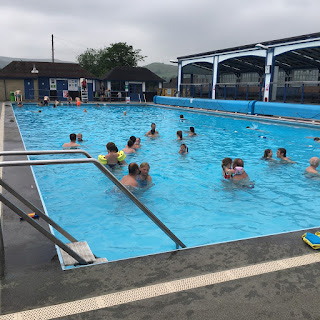 I swear it was sunny when we were actually in the pool, these pictures make it look really dark 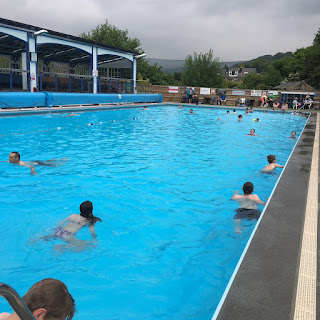 Plenty of room to swim! 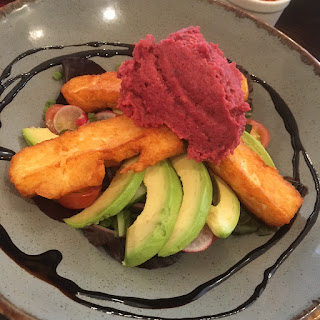 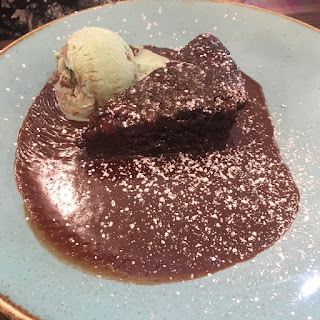 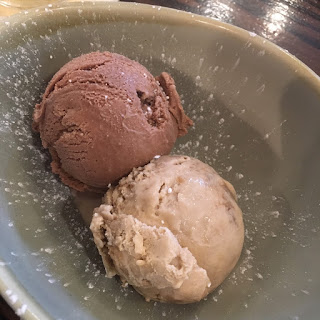 And finally my ice cream!

We had such a lovely day!