In the middle of May my friends Cath, Kirsty, and Morgan organised the first Swansea Zine Fest so I thought Lee and I would go to support them. I went to stay with Cath last year so I knew how far it was, so I got Lee to book Friday afternoon off work so we could set off in good time. We had already packed, so we just got some lunch from the shop and set off. The traffic was okay, we got stuck in a couple of places but overall it wasn't too bad. We got to our hotel at about 6pm.

I'd booked the Ibis because it was cheap (£50 for the night, one of the cheapest rooms I could find in Swansea back in January), and it turned out to be a really modern hotel on a little retail park. The staff were THE friendliest hotel staff ever, they also swapped our room without question when we asked. We were at the back of the hotel which was facing away from the road, which made it much quieter and nice. The room was small but very clean and comfortable. The bathroom had a walk in shower instead of a bath and it was a really nice shower!

We set off out to find something to eat. I wanted pizza so we just decided to go to Ask. The staff in there were a bit over-enthusiastic but we both enjoyed the food. I had arancini and then a goats cheese and olive tapanade pizza which was really nice. We drove down the seafront for a bit and looked at the beach, and then we drove back to the hotel because we'd noticed their pool table. We played three games on it and I had a couple of drinks from the bar. Then we went to our room and just got into bed. It was early but we were both tired, so we watched TV and I read my book.

In the morning we decided to have breakfast in the hotel. It was quite nice - Lee had several courses of pastries and fruit and hot food, but I just had a cooked breakfast and some nice hot chocolate. We checked out of the hotel and headed into the city centre to the zine fest venue.

It was held at a DIY space called the Volcano Theatre. Our table was next to Kirsty and near to Cath and Morgan, so that was nice because it gave us lots of chance to chat. The fest itself was quite busy, and it was nice to meet some new zinesters that I haven't met before. I bought and traded a bunch of new zines which I always love.

At 2pm there were people reading from their zines, so I signed up to read from my zine Shy Punk. It was way out of my comfort zone and I was really nervous, but I wanted to do it anyway. My voice wobbled and I had to move out of Lee's sight because that made me more nervous, but I did it and I'm really proud I did! People laughed and clapped so that was good!

At 5pm we packed up and said goodbye to everyone. Everyone was really tired by that point but I think everyone had had a good day. Lee and I got everything packed into the car and got going on the road by around 5.30. This time we went past Cardiff instead of through Neath and Abergavenny. We made really good time with no traffic at all. We stopped at a services to have some tea, but still managed to get back before 10pm. We were both really tired so we just got into bed!

It was a long way to go, but Lee and I had a nice time together. The weather was gorgeous so it felt like being on holiday! The zine fest was really good fun and I'm glad I could go to support my friends. If they do it again next year I would definitely go! 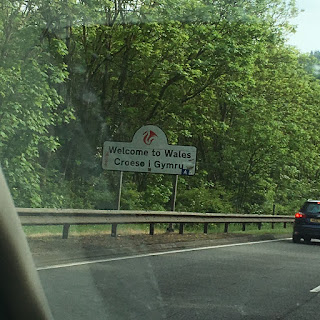 Croese i Gymru! This was while we were stuck in traffic, but it was ok 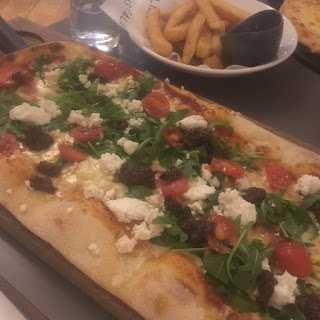 A panorama of Swansea Bay 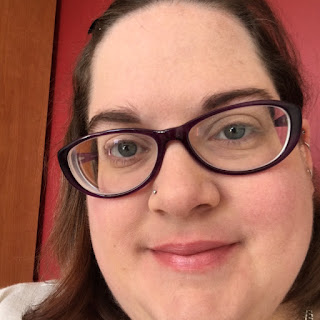 On Saturday morning I put some make up on cos I felt like I looked tired. Same gave me this lipstick a few weeks ago, I really like it because it's pale but still a bit glittery 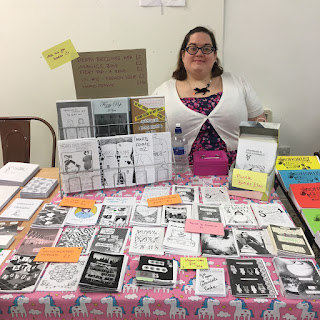 Me on our stall. I love the leaflet rack, I bought it on eBay for about £15 and I think it makes things look really professional 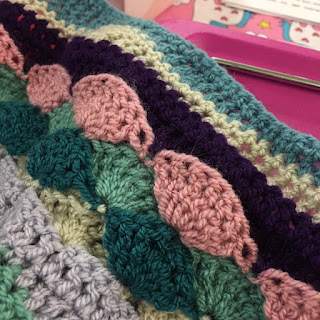 I took my crochet along with because I like to have something to do while just sitting on my stall. I didn't get much done, but I wasn't alone because there was someone a couple of stalls along knitting a sock! 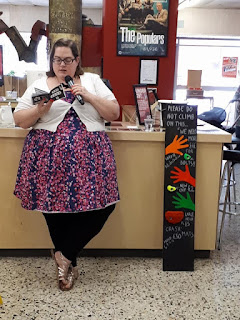 Kirsty took this photo of me doing my reading. Like I say, I'm really proud of myself, and I would do it again somewhere else. 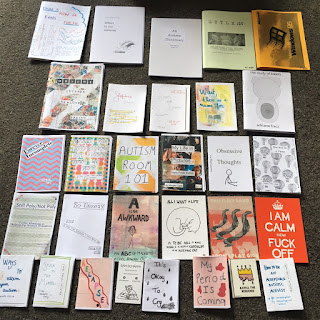 These are all the zines I bought or traded for, I'm so excited to read them! 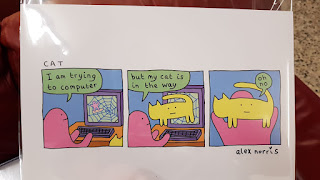 And finally here's a print Lee bought himself, because this is basically what Ivy does to him all the time!