The Courtyard at Womersley - Review

For Mother's Day we took my mum and my grandma out for afternoon tea at The Courtyard in Womersley, just off the A1 near Pontefract. Full disclosure: the owner, Jacci, is a dear friend of my mum's, and we've been before but not for ages. But I'm signed up to the update emails, so when Jacci sent an email back in January advertising Mother's Day afternoon tea, I thought that sounded like a lovely idea.

It was available for £20 with prosecco or £16 without. I booked three with and two without since Lee doesn't drink and my stepdad's not into prosecco.

We arrived and found the place really busy, and our table all beautifully set with a tablecloth and gorgeous vintage china. We ordered drinks and were then presented with the starter - roasted cauliflower soup and parmesan crisp. 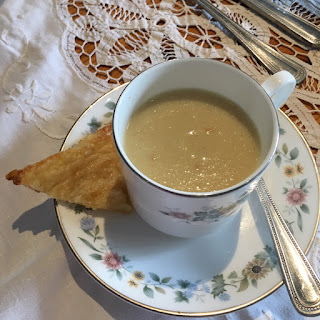 It was served in yet more pretty china and was just yummy.

We swapped about a bit so everyone could have what sandwiches they wanted, like Lee wanted a salmon one. There were plenty - we didn't eat them all! 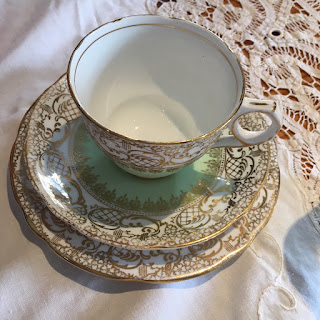 These were the gorgeous place settings, I absolutely love the colour of this china. 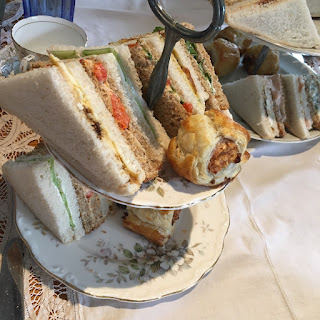 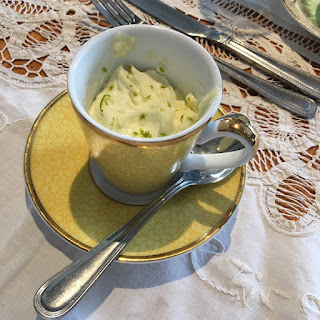 Next we got little mojito cheesecakes! They were really nice sharp lime, and the biscuit base had rum in it. Lee didn't like it so I had to eat his too, oh no. 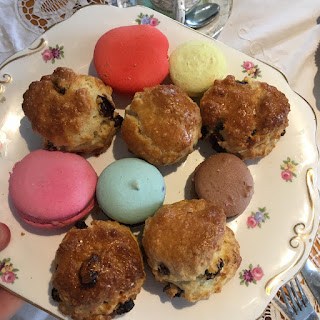 THEN the plates of cakes came out, and we had hot drinks to go with them. Look at all these homemade macarons! I didn't have a scone but there was jam and cream too. I had the mango macaron and then brought the strawberry one home which was also yummy. 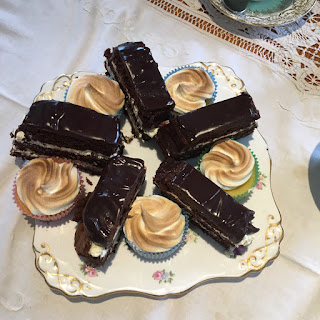 This plate were slices of chocolate torte and lemon meringue buns. I didn't have a bun but brought home a slice of cake, which was really delicious later on.

We'd all had plenty to eat and had had a really lovely time. I think it's well worth the price tag for a special occasion!
Posted by Rebecca at Monday, April 29, 2019