Years ago, when I first learnt to crochet, I said I would make Lee a blanket. I bought a bunch of Stylecraft Aran yarn in Denim, Silver, Raspberry, Aspen, Fondant, and black because those were colours Lee said he liked. I chose a granny square pattern from a book and made loads of squares. I decided to crochet the squares together with double crochets, which makes a nice raised line between the squares on the "right" side of the blanket. I did this for two strips, and I'd made around 54 squares so I could have just joined the rest together and finished it.

But I didn't. I put all the squares and the yarn and even the book in a carrier bag and then forgot about it. I've worked on other projects since then, obviously, and I kept meaning to get back to this. I've had the bag behind my desk for about eight months, but still hadn't got round to it. Then I finished another blanket for a friend's baby (I'll share photos of that once baby has received the blanket!) and thought, you know, I really should finish that blanket for Lee.

So I pulled all the squares out, put them into strips, and started to crochet them all together. I had to make a few more squares to make sure I had the right numbers of each colour, and I was really careful to keep the order the same as I crocheted each square into strips. Once that was done I crocheted the strips into the blanket as a whole.

I've not worked with Aran yarn much - it's thicker than DK and so the blanket is really heavy and warm. I was using a 5mm hook. The black was really hard to see, so I know there's mistakes in it but fortunately you can't see them.

I decided to just do a simple granny border in both the shades of pink as Lee really likes those colours. I had just enough of the raspberry left, but ran out of the fondant. I decided to buy another ball off eBay but had to wait ages for it, so while I did, I sewed in all the ends. There was a LOT. Most of the squares I had already done, thankfully, but the strips of crochet all needed doing.

The yarn arrived eventually so I just had to do a few more stitches, sew in the last ends, and hand it over to Lee! He loves it and it's already on the couch. The edges are maybe a little bit tight, but I've decided I don't care. 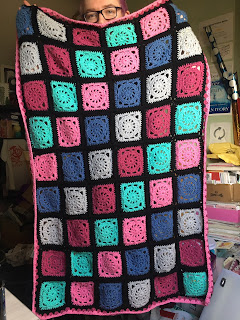 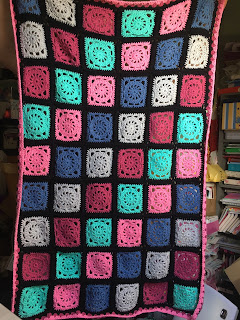