I feel like I didn't watch many films at the end of April because I got really caught up in family stuff and then in sorting stuff out for our vow renewal. I was really anxious about it in the run up and that always means that I don't watch many films, I prefer to watch TV as that's shorter and easier to concentrate on.

But! We did go see Captain Marvel which I LOVED! Here's what I saw: 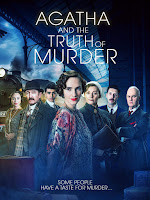 Agatha and the Truth of Murder is on Netflix, I thought it was okay but I preferred a book about the same murder - this by Jessica Fellowes
Lee and I watched 10 Things I Hate About You near its twenty year anniversary. He's not sure he's ever seen it!
And THEN Captain Marvel! Brie Larson is my faaaaaave. I'm not much of an MCU fan but I liked this a lot.

I hadn't seen Wonder, which is based on the book. It's okay, I didn't rate it all that much
I really enjoyed Good Vibrations, about a punk record company in Northern Ireland - I'd recommend this if you like music
I have never seen Disney's Peter Pan so it was on my Disney tracker! I didn't love it, but I don't love the Peter Pan story anyway

Lee and I watched X Men Apocalypse together. I love it. I love Quicksilver most
People on Netflix kept saying Unicorn Store, also with Brie Larson, was good, so I watched it. It's good!
And I really love Legend, with Tom Hardy playing both Kray twins. I've seen it a couple of times now 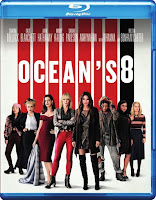 I have never seen Pitch Perfect 2 before so I watched it. I liked it but felt it needed more singing?!
The Heat is one of my favourite films because it's so daft and I love Melissa and Sandra!
...And so because I was on a bit of a Sandra kick Lee and I watched Ocean's 8 again. It's still great.
Posted by Rebecca at Saturday, May 25, 2019