What I Wore March 18th

Well the bummer news is that I lost my main job last week. It was the one I did two days a week, so it was the main source of income for me. My other jobs are much more infrequent. I am looking for something else.

Anyway, it has obviously given me a lot more free time, and so that I don't fall into a dark pit of depression the same way I did last time I was unemployed, I've already done things to get me out of the house.

On Monday I went to Huddersfield to see my BFF Sam. We went for Dixon's ice cream which is well known in Huddersfield. They have a shop in Lockwood. First of all we had really good fish and chips across the road and then I had the biggest '99 ever! It's been ten years since I had Dixon's ice cream but it's still amazing!

Then in the evening I went to my book club at Barnsley library which was sadly the last one due to restructuring. I may join the one at my village library, though.

This is what I wore: 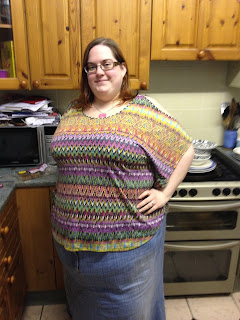 Skirt: Simply Be several years ago. I have two like this, the other is a slightly darker wash. I don't wear trousers so these are like jeans for me - something comfortable that I can run around in and not worry about. I also sometimes wear a black denim one that I got from Marisota.

The top is from New Look Inspire but I actually got it free at the clothes swap in January! I love the pattern and the sleeves - it will be really lovely in better weather! 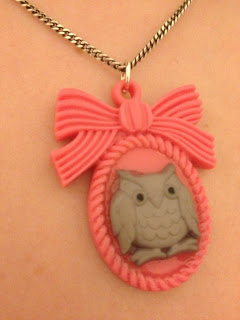 This is a close up of my necklace. My lovely friend Chloe has a business called Life's Big Canvas which I heartily recommend if you've never seen her stuff before. I love this necklace, it's so kitsch and tacky!

Sheffield Zine Fest and What I Wore

Hi! Sheffield Zine Fest was really amazing! Bravo to Bettie and Chella for organising it. It was held at the Electric Works which is right next to the bus and train stations so ideal for anyone travelling in.

I got the train, met Bettie and Jen, and we grabbed breakfast from the station before heading over to the Electric Works where we got to work moving chairs and tables and setting up. Then it was time to open and people started to pile in! It was a very good turnout. I sold lots of zines and some of my envelope sets and bought and traded a few new zines too :) 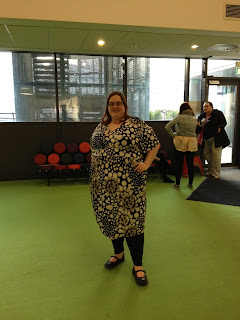 This dress confuses the hell out of everyone and that's partly why I like it! It was from the Arlene Phillips collection at Simply Be a couple of years ago and is one of the first dresses I bought when I first got into wearing them again. It is a bit longer length than I wear now, but still a good length. I love the confusing pattern - it has flowers, circles of varying sizes, and pixellated type bits too. It's so weird! People either love or hate it.

I always have to pin the wrap part to my bra because otherwise it flashes a lot of boob and bra. I keep the safety pin attached to the dress when I take it off so that I always know where it is.

It's a lovely drapey thick jersey, and it has a kangaroo pocket across the front! I haven't worn this dress in ages but on Saturday I couldn't remember why!

Sorry for the dark photo, I think the flash was turned off on my phone. Thanks for taking the photo, Lisa! 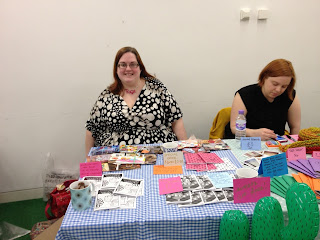 Here I am behind my stall. I hope it was an inviting one. This was the first zine fest I've tabled at, but I had such fun that I want to do it again! Bettie and I think we might road trip to some more. I had free sweets too to lure people in, I think it worked. My tablemate was Emily, it was nice to meet her.

Thanks to Jen for taking this photo!

Kirsty (of Fatty Unbound) and I led a workshop at the fest, on Body Positivity. Although it wasn't specifically fat-positive, most of the attendees were plus sized so the discussion had that slant to it. We talked about comments that we've had about our bodies or our clothes, and we talked about coping strategies. (And yes, ignoring and walking off is a valid strategy! Sometimes it's the safest thing to do for yourself!) Then we talked about accepting compliments and how we're not very good at it. If someone pays you a genuine compliment, just say "thank you." It's a radical act! Then we went round paying each other compliments, so I hope everyone left feeling heartened.

My friend Rachel was at the fest. I haven't met her in person before so it was lovely to do that. She's incredibly sweet. After the fest a ton of us went to a pub called the Rutland Arms where they do really fab chips and cheap food. I had the thickest burger ever and chips. I was sitting next to Rachel so it was nice to chat with her more.

Such a fabulous day!

What I Wore 6th March

I haven't been here for ages, I'm really sorry! The next few posts might be out of order because I've got some photos on the camera and some on my phone. This is what I wore on Wednesday to go to uni 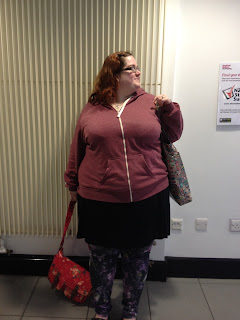 Jenna took this photo of me just in the foyer of Sheffield Hallam. I'm wearing galaxy print leggings from New Look, black knit dress from Asos, and my new red hoodie from New Look. I bought it in Birmingham last weekend, and was thrilled because I now get student discount in New Look! This could be dangerous!

My pink bag is by LYDC and the one of my left shoulder is from Paperchase. This week in my lecture a friend of mine said "You like your patterns, don't you?!"

I'm enjoying the MA - it's hard work but it will be worth it.