What I Wore 25th August

Lee and I were out of food almost entirely, so we decided to bite the bullet and head to Asda. I LOATHE supermarkets, and we always argue when we go - I've been known to just abandon an entire basket of shopping cos I get so annoyed! We usually do it in small bits or get it delivered, but today we braved it, and it was actually fine.

Here's what I wore. I got this Simply Be dress in the sale a couple of months ago, and I LOVE the pattern on it. It's gorgeous! 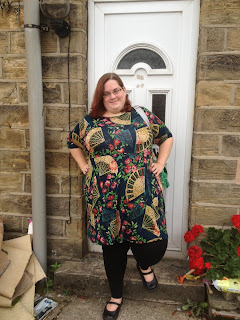 Please excuse the mess to my right, it's still carpeting from when we redid the living room!

Email ThisBlogThis!Share to TwitterShare to FacebookShare to Pinterest
Labels: ootd, simply be

What I Wore August 27th

I went to Sheffield on Tuesday to meet a new friend/bookkeeping client. We went to the Blue Moon Cafe which is near the cathedral. It's all vegetarian with a wide choice of vegan food too - I really recommend it if that's your bag. I had an excellent roasted veggie burrito with lots of yummy salads, and a gorgeous vegan chocolate and coffee torte.

I asked P to take this photo as we left. As you can see, I've dyed my hair. It's purple up close, but lots darker than it was - I'm not used to it yet! Lee did it for me.

This dress was from Asos in the sale and I really like it. 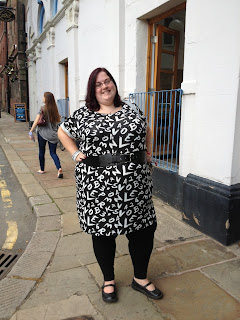 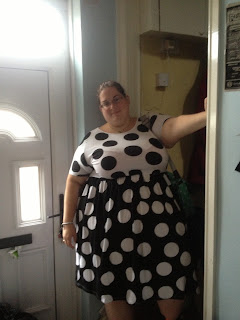 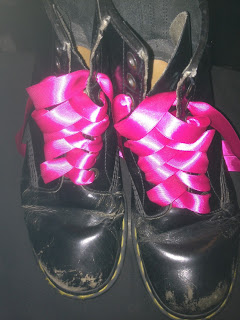 What I Wore 21st August

21st August was Lee's birthday. He was born on his dad's 21st birthday, and also happens to share it with the late great Joe Strummer. During the day we went swimming at a leisure pool in Sheffield, and in the evening we went to Akhbars in Leeds for curry with my mum and stepdad. It was so good!

Here's what I wore. I didn't get the Beth Ditto dress the first time around but I managed to get this on eBay for around £15 a couple of years ago. I've only worn it once before but I can't for the life of me remember why! I love it! I'm wearing a cardigan because I'm self conscious about my upper arms, but I did take it off in the restaurant as I was just so hot! 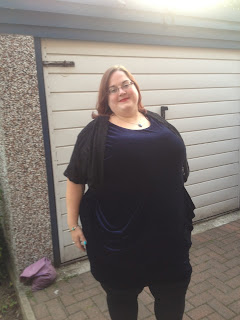 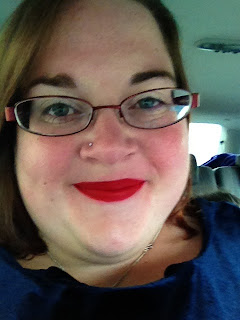 And here's my face. The lipstick is Russian Red by MAC, it was an anniversary present that I bought in Manchester airport on our way to Spain. I scrub up alright, don't I?

What I Wore August 5th

I arranged to meet my friend Sarah at Meadowhall on Monday as she's on school holidays (she's a TA). We like shopping and then eating at Yo Sushi, so we had a bit of a mooch around before lunch. I got some nail polish and a dress in the sale at New Look. I was a bit disappointed with the selection of stuff in the Yours store currently - it seems to be all black/dark, with drab prints. Brighten it up!

We had a nice lunch at Yo Sushi, but Sarah wasn't feeling well so rushed off afterwards. In the rush I forgot to get her to take my photo, so instead I found a nice Clinique worker and asked her to take my photo. I did explain that it was for my blog. Thanks nice lady!

I've only worn this dress once before, but I don't know why as I feel great in it! 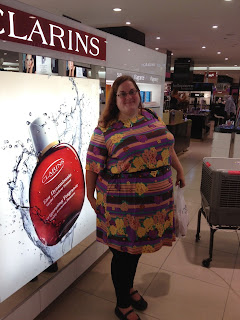 Okay, I admit, this is kind of a cheat. I did not take this photo with this challenge in mind, but I completely forgot about Magnificent 7th, so I looked through my photos to see what matched the criteria.

The challenge this month was "barbecue". Now I absolutely love a barbecue - we even had one at our wedding! I would wear something quite simple and relaxing. 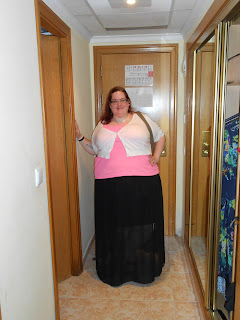 I loved the simplicity of this but with the pop of colour of the vest. It's much brighter in person! I also like how the skirt shows off my legs without flashing too much flesh.

Check out everyone else:

Posted by Rebecca at Wednesday, August 07, 2013 No comments:

I'm a self-employed bookkeeper currently (if you need any bookkeeping doing in Yorkshire, I'm your woman!) and yesterday I went to do some work for my friend A in Saltaire. After I'd finished there I went to see my friend S in North Leeds, and this is what I was wearing all day.

I'd seen this dress and loved the pattern, and it's a great length on me. It's described as midi but is just knee length, but that's great and helps to keep the look professional. I also really like the sleeve length. 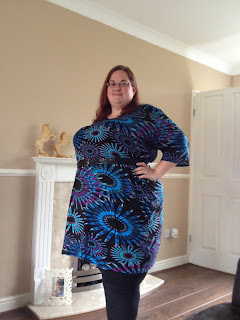 What I Wore July 4th

On July 4th Lee and I and my mum and stepdad were all back from our holidays so we went over to their house to swap presents and holiday photos. It was just beginning to be hot, and this is what I wore. 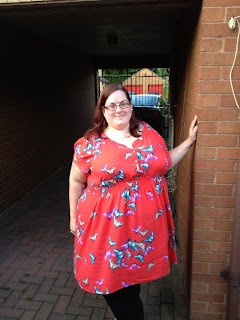 I'd been eyeing up this shirt dress from Yours Clothing for ages but I wasn't sure about it's £30 price tag as the style isn't something I've tried before. When I saw it in the sale for £18, it came home with me.

I love the colour and the style. I sized up to make room for my boobs but I didn't have to. The shirt buttons at the top are very secure and don't gape. The dress is a lovely length on me.

Photo taken by my stepdad outside the back of my mum's house. 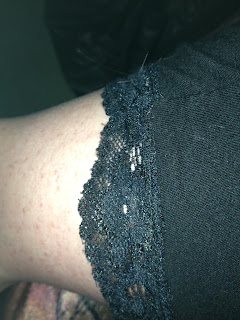 This is the bottom of my leggings. They're from Yours too, they're calf length so perfect for the summer, and I like the lace edging to them :)
Posted by Rebecca at Sunday, August 04, 2013 1 comment:

Email ThisBlogThis!Share to TwitterShare to FacebookShare to Pinterest
Labels: ootd, yours clothing

My friend Amy has an annual camping trip to somewhere that's almost wilderness camping - very few amenities, no toilets, pee in the woods type of thing. She's wanted me to go for ages but I'm a caravan girl! But this year I decided to go, so my BFF Sam and I went halves on a tent (total bargain at less than £40 each!) and drove last Friday to Shell Island in Wales. It's absolutely beautiful - sand dunes, beach, unspoilt places to camp. We were a mile - one mile - away from the entrance/exit. They don't allocate pitches - you just choose a space. We were cocooned on two sides by woods, which was nice. There were 15 of us in total.

We took it in turns to cook for each other and with two vegans and two vegetarians this was no mean feat, but it did mean I ate some amazing veggie food that I'm going to incorporate into my life!

I also have to say that I felt really confident just striding about in my swimming costume. Even though I didn't know most of the people I was with, I knew Amy and I know her well enough to know that her friends would be good people too. As for everyone else on the beach, well I just didn't give a crap about them! 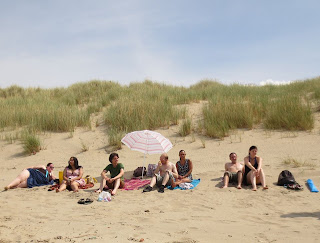 Here we are on the beach - I'm far left, then Sam, Mike, James, Lizzy, Steve, and Laura. Photo by Amy. 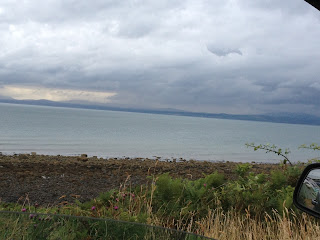 I took this as we were leaving on Monday. 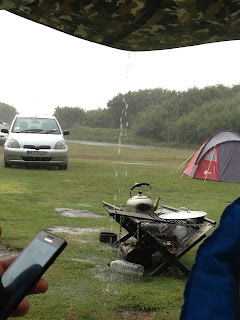 Although each day was lovely, both days around 6pm it absolutely threw it down meaning that we all had to huddle in the gazebo under tarpaulins! Ah well, it all adds to the fun!

Email ThisBlogThis!Share to TwitterShare to FacebookShare to Pinterest
Labels: friends, holiday, simply be

I've been wearing glasses for almost 25 years - ever since I started school in 1989! I couldn't see the board so my sight was tested. My first glasses were mint green and they had Minnie Mouse on the sides! Since then I've had glasses galore, including some real Deirdre Barlow type ones. I tried contact lenses for a while when I was a teenager and since, but find that I can't sit at a screen all day with them in. I have seriously bad eyesight - one of my eyes is -10 and the other isn't far behind. I can't see a foot in front of me without them so my glasses are an absolute necessity.

I guess I was about 20 when I got prescription sunglasses and I couldn't live without them now either as I have incredibly sensitive eyes and need to wear sunglasses for driving. I have to spend a LOT of money on my glasses and I have to pay for the lenses thinning. It's annoying, but I have to do it. Recently, my lenses were so scratched that I needed new glasses.


These are my regular ones, I chose red because they're bright. 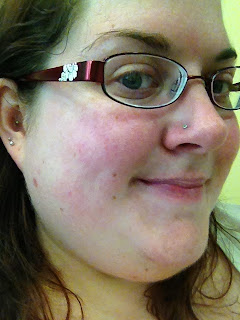 And these are my sunglasses. They're pink and chocolate brown and I liked the 50s vibe to them. 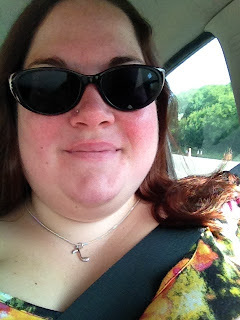