I went to York on 17th March to see a friend of mine and we dropped into the Designer Outlet Village there. We didn't have much time so only went into a couple of shops, but this is what I picked up.

I haven't been shopping much recently as I'm trying to not spend as much money. However, I spent just £20 here! Bargain!

First stop was Claire's, which is cheap enough anyway but where the outlet has 1/3 off the marked prices. My friend wanted some sterling silver earrings and managed to pick up two pairs. I got some gold plated ones which I will put in the 2nd and 3rd holes in my earlobes. I don't change the earrings in those holes, I leave them in 24/7 so they have to be either gold or silver,

I got a new phone recently but only have one case for it, so I picked up three at bargain prices! 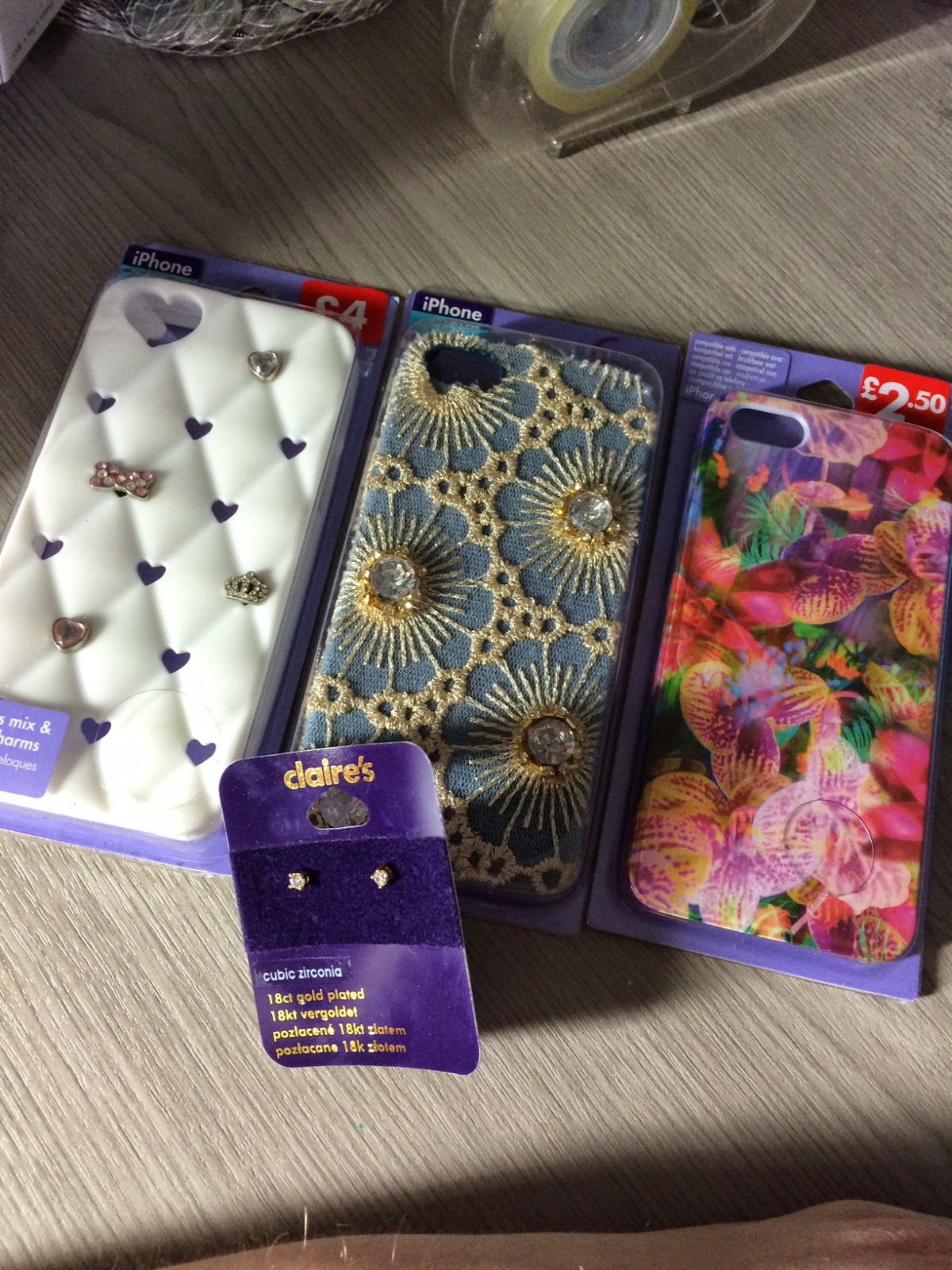 Yes they're horribly tacky - I love a bit of kitsch!

We then headed into the make up outlet store across the way, which sells loads of different make up brands at around a third off RRP. I could have honestly spent a fortune there! Instead I limited myself to this MAC nail polish which was £7. The shade is Discotheque and it's a gorgeous silver glitter. I can't wait to wear it! 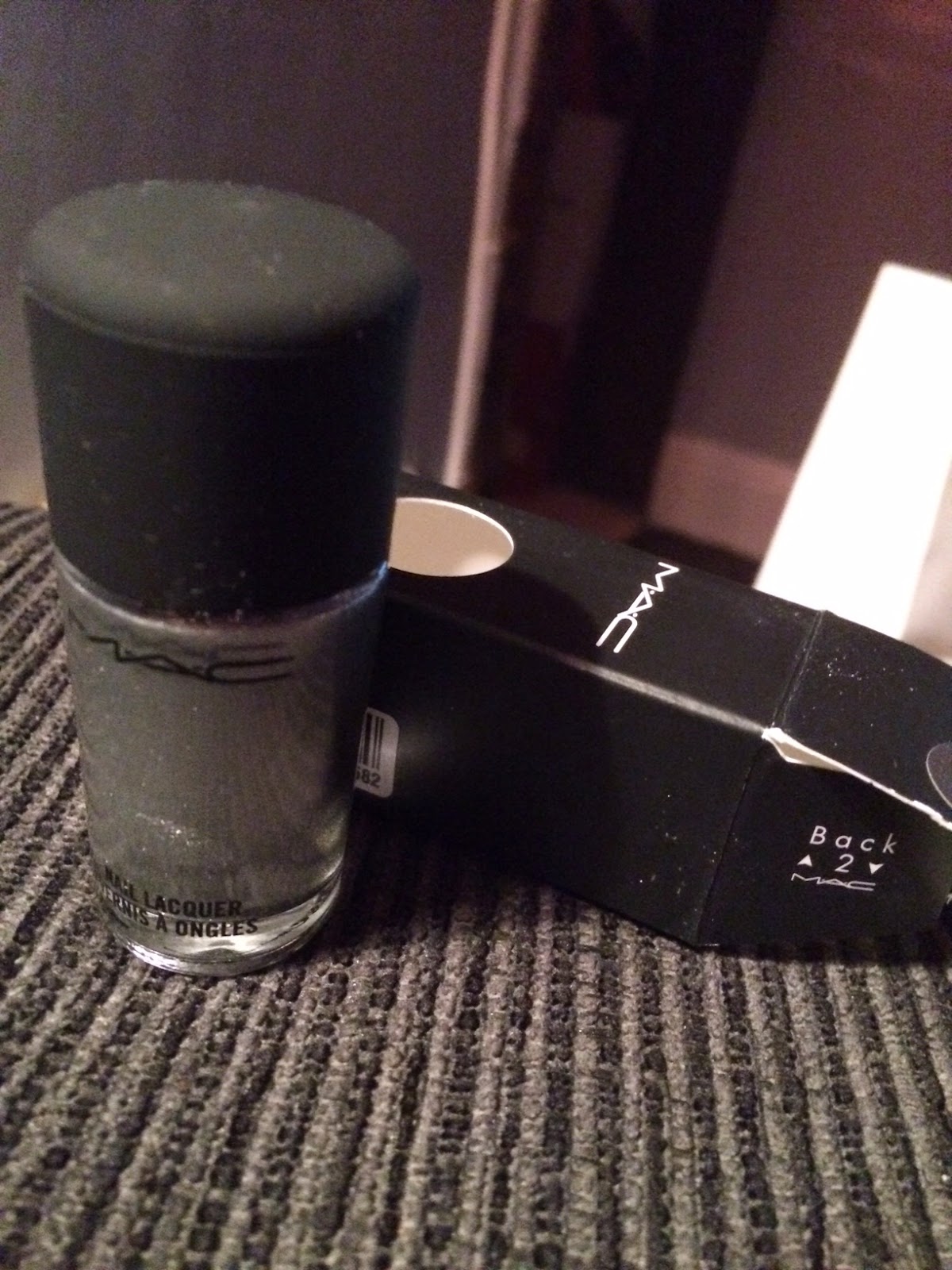 Email ThisBlogThis!Share to TwitterShare to FacebookShare to Pinterest
Labels: shopping

Sheffield Zine Fest took place again on 14th March! I love zines - they're so DIY and give voices to those who may not otherwise be heard. This is the third year that Sheffield Zine Fest has been run by my friends Bettie and Chella, and their hard work always pays off.

I didn't have a table to sell my own zines this year, but I did put my own ones on the communal table which I was helping to run with Bettie's partner Jen. I also ran an hour's long workshop about Mail Art where basically I took a load of paper and craft supplies and let people play with them! I think people enjoyed it.

I had my friends Tukru and Emma staying at mine which was lovely, we had a good time.

These are the zines I bought at the festival. 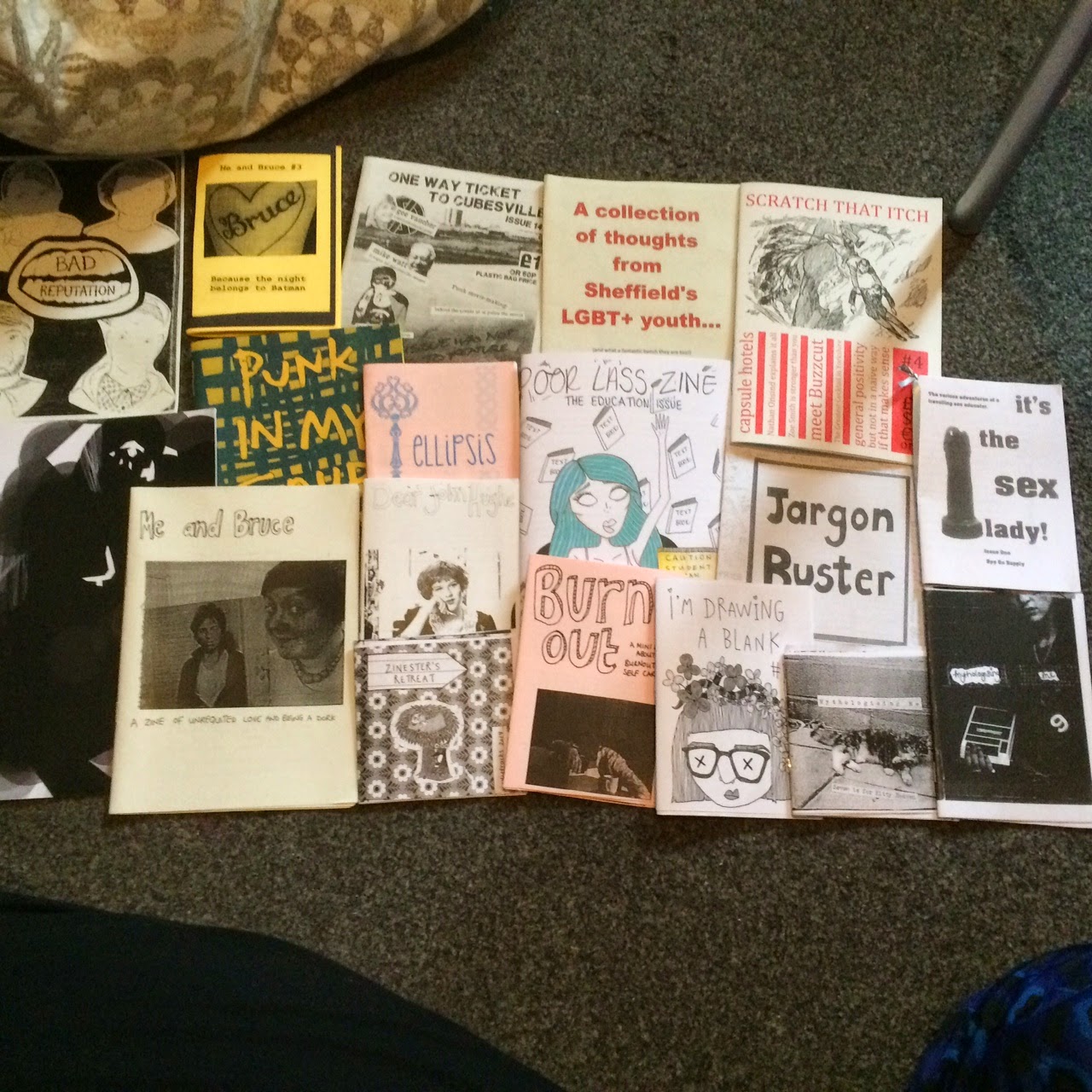 I can't wait until next year!

What I Wore 15th March

On Mother's Day my mum and stepdad came to ours in the evening for tea. Lee was just beginning to be ill so it was quite quiet - we listened to classic rock songs and just talked. Lee and I made enchiladas with salad and refried beans, and we had sticky toffee pudding for dessert. My mum and I shared a bottle of prosecco that I'd bought and a bottle of rose that she brought.

I recently ordered some stuff in the Yours sale and kept two dresses, this being one of them. The eagle-eyed amongst you might remember that my mum wore this dress on Christmas Day (blogged here) and I really loved it, so I ordered it. I could have actually sized down, it's really generous. Now we just have to make sure we don't wear it at the same time! 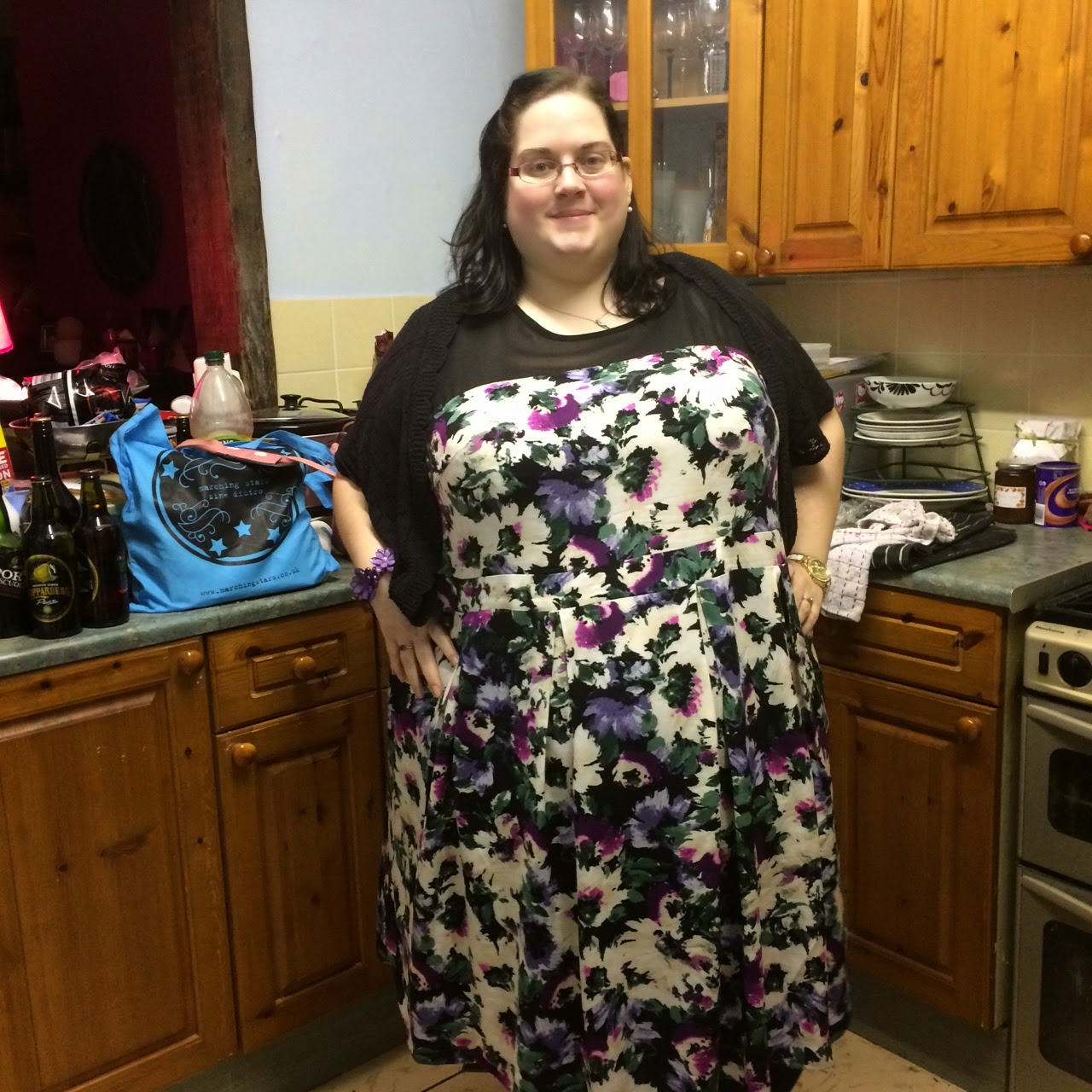 Please do excuse the messy kitchen. We're about to have a new one put in so everything is everywhere!

Email ThisBlogThis!Share to TwitterShare to FacebookShare to Pinterest
Labels: yours clothing

Massive hoods - why is that?

At the clothes swap Debz and I were talking about hoods. She had bought a new coat and the hood was huge. You can see her photo on Instagram here. It doesn't make sense, plus size clothing retailers, that when you scale up the body you scale up the hood? How big can one person's head be?

In the evening after the swap I got into my night things and put my dressing gown on. I never put the hood up because it's just huge. I took this photo of myself with it pulled fully up. Isn't it ridiculous? This dressing gown was from Yours and I love it - but there's no need for a hood this big! 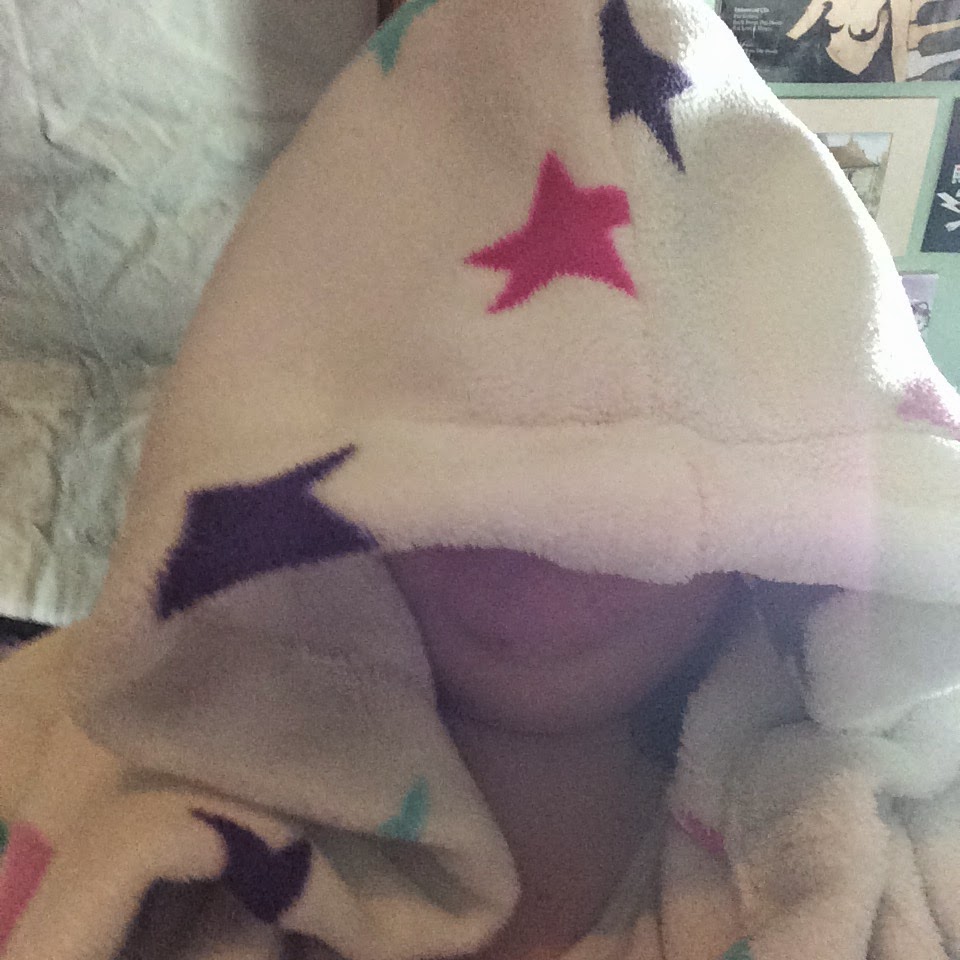 Email ThisBlogThis!Share to TwitterShare to FacebookShare to Pinterest
Labels: yours clothing

Here's What I Would've Spent Challenge

This is another Here's What I Would've Spent Challenge post, and this time Debz has asked us to focus on Asos' main range. Now, it's no secret that I love Asos (check out the label here) and I think they do plus size clothes excellently, but there are sometimes things that pop up in their emails that I wish would fit me. Here's some below:

I love crochet and I like this dress, the colours are ace

This is a really expensive dress but for a special occasion I love it!

I'm desperate for something tie dye as it seems fashionable this summer. Surely this wouldn't be difficult to make in bigger sizes?!

I love the colour and the jacquard pattern of this dress. I think it would suit me!

So there's just a few things that I might've been tempted by if they were available in my size. Come on Asos, you can do it!

See who else is taking part:

Email ThisBlogThis!Share to TwitterShare to FacebookShare to Pinterest
Labels: asos, what i would have spent 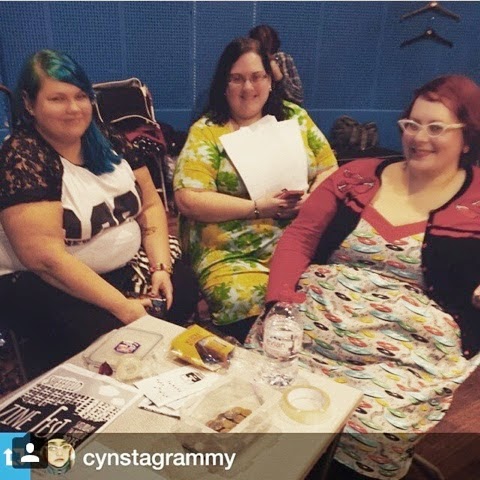 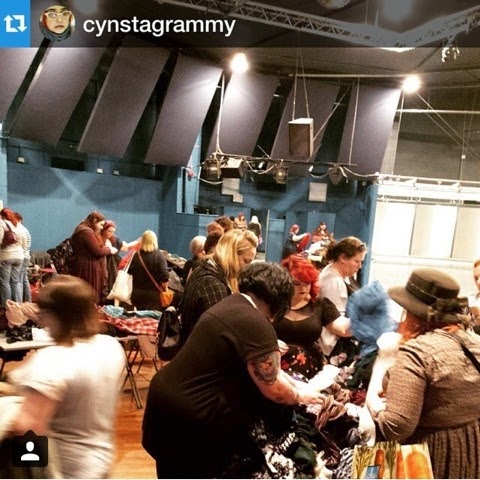 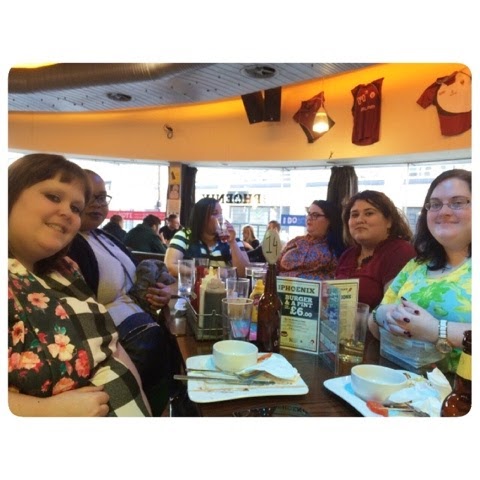 Debz has put together a thing whereby plus size bloggers write posts about each other and share the love. She actually wrote about me! You can read it here. I'm really humbled by her words - especially when she says about the good things I do for the community :)

I was given Vicky of The Curved Opinion to write about which is great as I've read Vicky's blog for a while now. I like the mix of subjects on her blog, and I love her fashion style and wish I owned most of her dresses! I also think she's really pretty.

Do you read Vicky's blog? Can you share some blogger love today? Who should I be following?

Email ThisBlogThis!Share to TwitterShare to FacebookShare to Pinterest
Labels: blogging, blogs i love

I'm so sorry I haven't posted here for a while! I have had flu for the last few weeks - it started with a sore throat and then became a horrible sinus infection. I couldn't even get out of bed which is so unlike me - I usually manage to at least potter round the house. Lee has got it now and has been off work all week. He's trying to get better because we're off to Whitby with some friends this weekend! 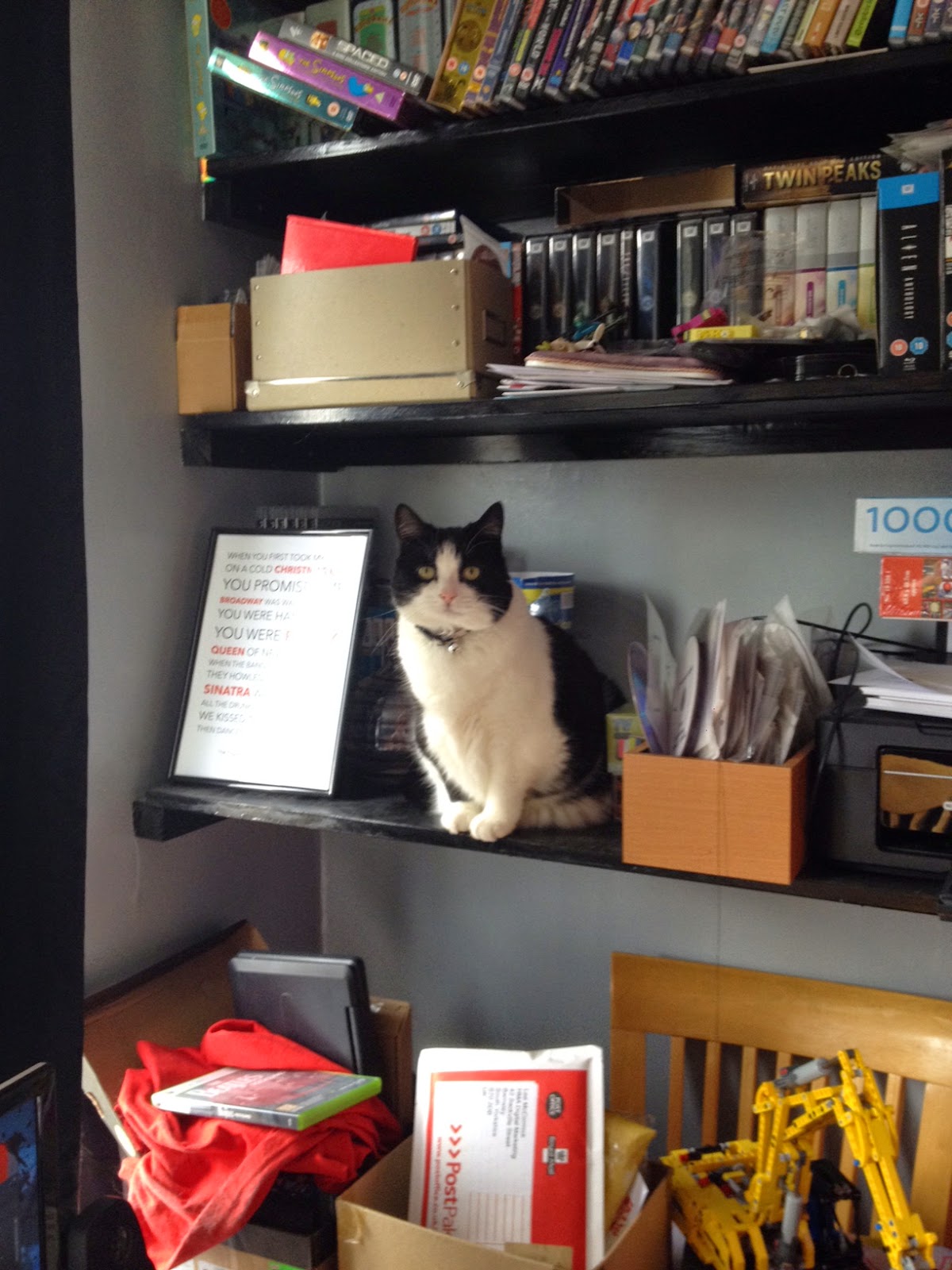 I was out the other day when Lee sent me this picture of the cat sitting on the bottom shelf in our living room, a place she shouldn't be!

Email ThisBlogThis!Share to TwitterShare to FacebookShare to Pinterest
Labels: life

Films I Watched in February

As with last month, I've done a round up of films I've watched this month. I have varied taste in films, and Lee and I tend to watch things we already like when we do watch a film together. I didn't watch as many films this month; I've been watching TV instead.

1) Maleficent - I like Angelina Jolie and wanted to see this. I really enjoyed it! I like things which put a twist on a familiar story
2) The Time Traveller's Wife - I've never read the book but I like Rachel McAdams so I thought I'd give this a go. I loved it. I really want to read the book now.

3) Snatch - again, I'd never seen this and wanted to see what I was missing. I liked the different narratives. I don't think it deserves all the hatred towards it, although Brad Pitt's accent is terrible
4) Toy Story 3 - Lee and I watched this together; we love the Toy Story films although I've seen this one the least. I like it.

5) Scream 4 - we love the Scream films but I think we've only seen this one once before. I couldn't remember much about it, but I did remember the murderer. It's not as great as the first ones, but it isn't bad.
6) Angels & Demons - I like Dan Brown's books - even though I know they're rubbish really - and I saw The Da Vinci Code a few years ago, Lee and I saw this on Netflix and I had to explain a lot of it to him. I think it was quite true to the book, given the time constraints.

7) Alfie (the original) - I've never seen this even though I like Michael Caine and watch The Italian Job regularly. I quite liked it, the fashions were great.
8) Submarine - I mainly wanted to see this because it's British and directed by Richard Ayoade. I haven't read the book, but I thought the film was great.

9) Sicko - I like Michael Moore's films even though they make me angry because of the injustice they show. This one is about the state of healthcare in the US. I recommend all of his films, but especially Bowling for Columbine.
Posted by Rebecca at Tuesday, March 03, 2015 No comments: