On the 19th of August we held another clothes swap in Sheffield, this time at Mugen Tea House on Scotland Street. I've been there a couple of times, as the owner Sarah is a friend of a friend, so when I was looking for a place to hold another swap I thought I would see if Sarah was up for it. She was! So Lee and I rocked up around 10.30 on Saturday to get set up. Laura came to help too, and then more people arrived and the swap got underway!

I got a few bits, but I mostly sat just chatting with people. I had cake to eat, and a couple of drinks. I saw loads of friends and a few new people too. I think we had about 25 people in total which is pretty good for a new venue! Mugen isn't the biggest of places but we had plenty of room in one half, and other customers could come in too. We finished around 3pm and tidied up, hopefully leaving the place back how we'd found it! We headed up to the pub for a couple of drinks then, which was really nice.

I had a lot of fun and I'm really glad that so many people came. Lee took this photo of Laura and I, don't we look lovely? 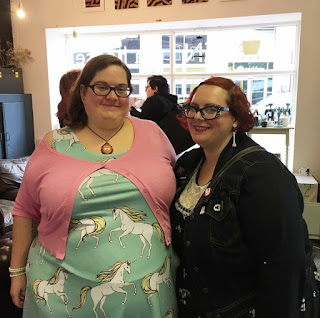