Okay this isn't going to be much of a recipe as I'm not a cookery blogger, but at the end of July I made such a perfect chocolate cake that I thought I'd write a post about it. I was proud of myself!

This is the recipe that my mum taught me when I was about nine. I know it off the top of my head and it's barely even a recipe. I use the same recipe to make a Victoria sponge, only omitting the cocoa powder. Lee likes it when I make a cake and he often helps me, especially tidying up. I tend to make a mess when I bake. The last few times I've made a cake it's been a bit rubbish - tasted nice enough, but not amazing. I was thinking about it and this time I made some changes, which I'll detail below. The cake turned out PERFECT. Seriously, it is the most gorgeous cake I've made in FOREVER. Here's what to do:

First of all, preheat the oven to gas mark 6 or whatever that is in electric ovens. Prepare your sandwich tins by greasing them with margarine and kitchen roll, and then dusting them with flour. You can use greasproof paper too I suppose, but I like my method better. I used to have a cookery teacher called Miss Brown, who also taught my mum, who used to say 'grease' like it rhymed with 'sleaze' not like it rhymed with 'crease'. She was odd.

Weigh out six ounces of sugar and six ounces of margarine. I always use Stork for cakes, it seems to work better than butter. I use a hand mixer and a plastic bowl. Cream the butter and sugar together until light and fluffy. Crack in three eggs, one at a time, whisking thoroughly in between each one. If the mixture looks like it might split, chuck in a handful of flour.

Weigh five ounces of self raising flour and once ounce of cocoa and sift, because cocoa always has those really annoying lumps in it. Add a little at a time to the egg/sugar/margarine mixture, like maybe a fifth at a time. Now, I usually use a metal spoon to fold the flour into the mixture, but this has seemed to knock all the air out of my cake. This was one of the things I wanted to try to do differently, so I used the hand mixer to mix the flour in. My hand mixer has three speed settings, and when mixing up the other stuff I had it on the highest one. But when I was folding in the flour I had it on the lowest setting, and I was gentle with the mixture. I felt like it really helped, and my mixture was beautifully smooth.

Divide the mixture between the sandwich tins and bake for about twenty minutes. Again, I usually left it longer and my cakes were getting burnt. So instead we checked it at twenty minutes, by sticking a skewer into the middle of the tin. It came out clean, so the cake was done!

Take out of the oven and leave to cool for a few minutes. Then run a knife round the edge of the tin and sort of wobble the cake out. Leave to cool on a wire rack.

When totally cool, make the buttercream. For this, I use proper butter, icing sugar, and cocoa powder. Again I changed what I did. My mum's method is to use a little bit of boiling water to make a paste out of the cocoa powder, then to add this to the butter and icing sugar and beat them all together. She manages to get this to taste really nice, but I have been having mixed results. So this time I weighed out four ounces of icing sugar and one ounce of cocoa powder. I sifted them together in a bowl and added cubes of butter. I honestly couldn't say how much, but about half of a 250g packet. I kept mixing until it was nice and smooth. I would definitely do this again rather than my mum's method.

I spread a very thin layer of the buttercream on each side of the cake, the so-called "crumb layer" which makes the rest of it stick together better. Then I glooped all the delicious stuff on to one side of the cake, and sandwiched them together.

Meanwhile, Lee melted some Dairy Milk in a bowl in the microwave (something which I couldn't do, I'd burn it! I would melt the chocolate over a pan of hot water) and we spread that on top, taking care to not let it drip down the sides. Leave to set, preferably overnight, and then cut and enjoy!

I should really definitely make a Victoria sponge sometime soon... 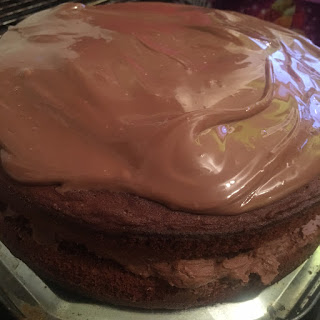 Just made, with everything setting. The very edges of the cake look slightly burnt here, but they definitely don't taste it. 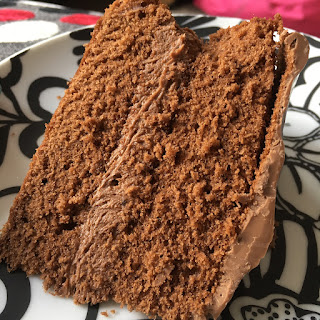 And the very first piece! The buttercream tastes almost fudgy, it's delicious.