In the middle of July I went to the Isle of Wight with my friend Von. It's ages since we've been away somewhere together, so she suggested the island as she's never been. My godmother used to live in Southsea in Portsmouth so I have been before, but not since I was about ten and I didn't remember much of it. So I was pleased to go back!

I drove to Von's house in London on Thursday evening and we stayed at her overnight. Then we set off for Southampton at around 8am on Friday as we weren't sure how long it would take to get there. As it was we were early, but couldn't get on an earlier ferry, so went for coffee instead. We sailed at noon, and it took about an hour. We sat on the back of the boat watching the Solent, and it was lovely and sunny and warm 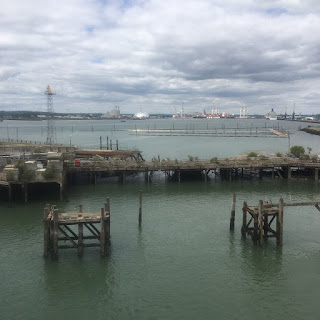 This was the view of Southampton docks. You can also go from Portsmouth but it was cheaper to go from Southampton. 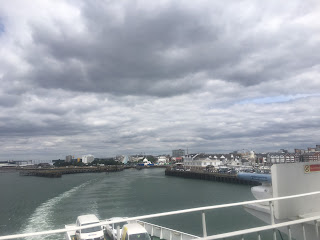 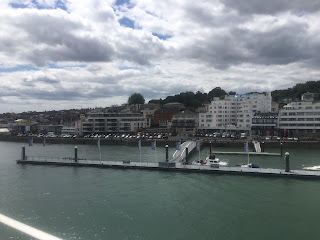 Von had booked Friday night's accomadation so I had no idea where we were going but had been told to pack my swimming costume! We stopped off en route for Von to buy a swimming costume as she'd managed to leave hers behind, and then we stopped in Newport, here.

It is an absolutely stunning Airbnb and if you're looking to go to the Isle of Wight I would utterly recommend it. Jerry and Julie are extremely lovely hosts and the house is just stunning. They have several rooms if this one doesn't work for you, all listed on the website. It's all really clean and lovely, with extra touches like dressing gowns in the room. We got changed and went down to the pool. 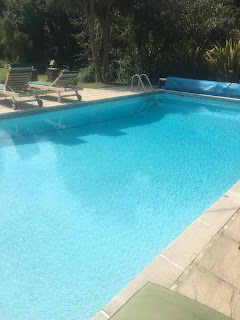 Which is also clean and lovely and so relaxing. It wasn't even too cold. We stayed there for a couple of hours swimming and reading and sunbathing. 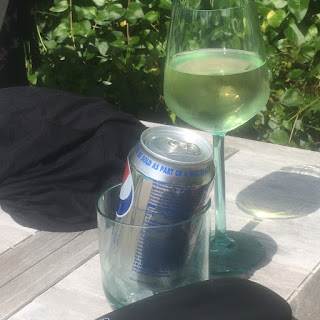 Jerry offered us a drink at one point so I had a lovely chilled glass of wine.

At around half past five we went inside to have get showered. We decided to drive across to Ryde for tea, so we got there just about 7pm. We ended up eating at Ryde Tandoori, it was nice food and reasonably priced. We went back to the B&B and drank some wine and watched a film. It was a lovely relaxing day. 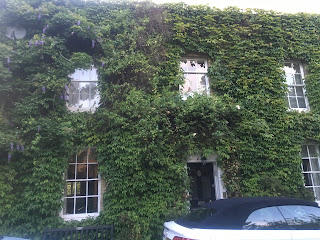 The B&B from the front. 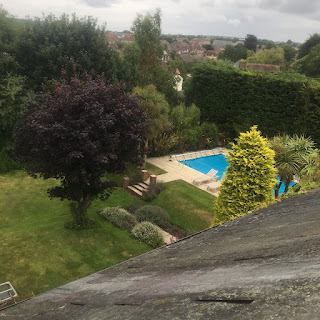 View from our second floor room.The garden is huge and there's a tortoise and several cats too! 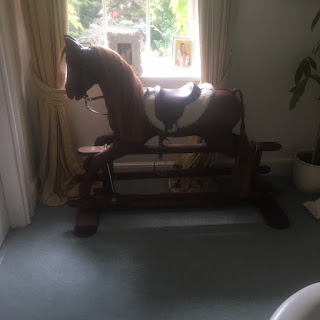 In the morning we got up and went down for breakfast. This rocking horse lived on the first floor landing. 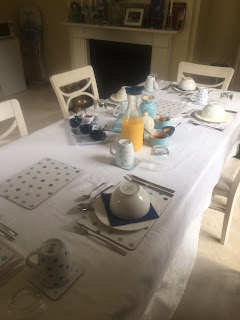 The dining room set out. There was a family visiting from Australia at the other end so we chatted to them a bit. 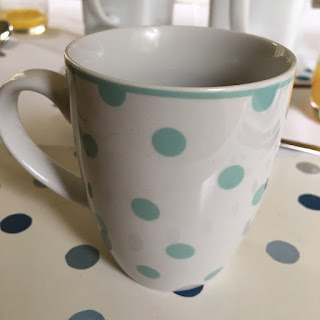 All the crockery was cute like this, I wanted to steal this mug. We checked out around half past ten and set off for the day. I would definitely go back there and stay for longer. Absolutely lovely place!