On Sunday we drove to The Needles and parked, which was pretty expensive but once you get inside there are choices about what you spend money on. You can buy a bok of 12 tickets for £9 and each ticket is worth £1 in most of the shops and kiosks, including drinks and stuff. It's a pretty good deal.

I went to the Needles when I went to the Isle of Wight when I was little, so I vaguely remembered them. I didn't remember the park, though, at all. We decided to go straight down on to the beach (6 tokens for a return) and go on a boat to the Needles themselves (not included in the token system as they're owned by someone else). We went on the chairlift. I went by myself in one and it was terrifying. So, so scary. I'm not a huge fan of heights and it just felt like it would fall off and I would die. I sometimes shut my eyes and sometimes I looked at the Needles, which were far enough away that they didn't give me vertigo. I was really glad to be on the beach though.

Once on the beach we joined the queue for the slow boat, which just goes to the Needles and back, as opposed to the fast rib, which goes out along the whole of the bay. We thought we'd get too wet on that and I'm not keen on those fast kinds of boats anyway. We were waiting for quite a while, and while it was cloudy it wasn't wet, so we didn't mind. There were a lot of foreign tourists here and on the island as a whole, which really surprised me but I'm quite pleased that they would want to see things like this. We got on the boat and set out in the bay.

Alum Bay is known for having lots of different layers of coloured sand which were formed millions of years ago and then turned ninety degrees by ice, so it has vertical layers of different colours. I learnt this on the boat!

I managed to get sunburnt on the boat by stealthy sun, it was really cloudy but I was definitely pink. We went back up on the chairlift and then wandered round the rest of the attractions - some arcade games, a couple of shops, and the shop where you buy a glass shape and fill it with all the different coloured sands and get it sealed. I remember this from being little. I bought Lee an Isle of Wight shaped piece and had a lot of fun filling it up. We had a drink and went in the sweet shop. We didn't end up leaving until about 2pm, meaning we'd been there well over three hours. You could spend all day if you tried.

Some pictures from the Needles: 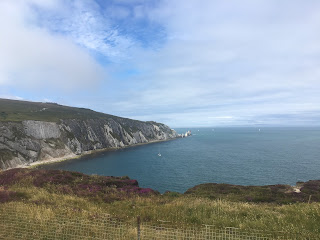 The view from the top of the bay. You can't exactly see the Needles from here. 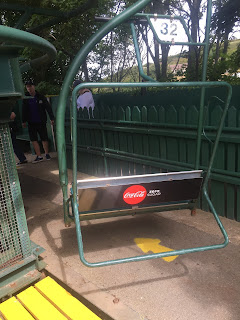 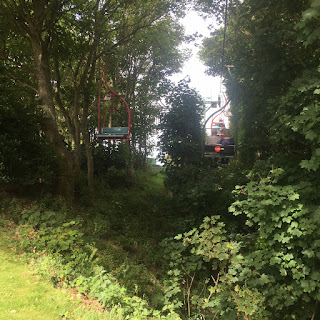 Setting off in the trees is fine... until they drop away and cliff is beneath you. Von videoed it! 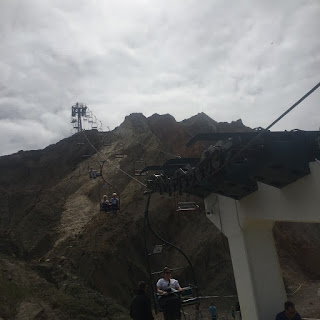 See the wheel at the top, that's where you start to come down the cliff. So scary. I was proud of myself! 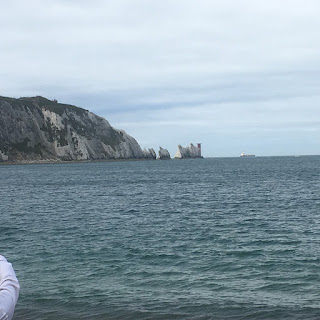 From the beach, just getting on to the boat. 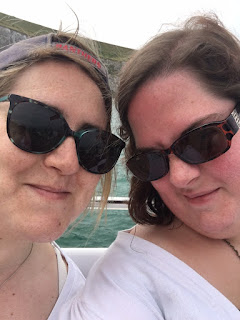 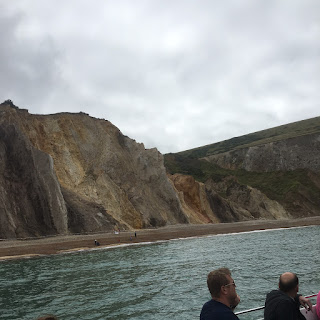 These are the different colours of rocks found 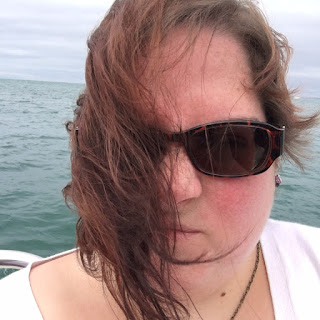 Windswept doesn't even begin to cover it 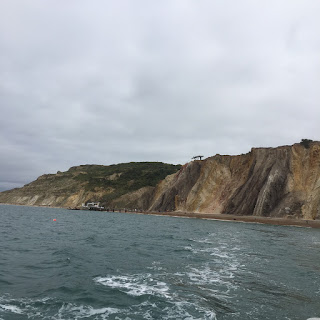 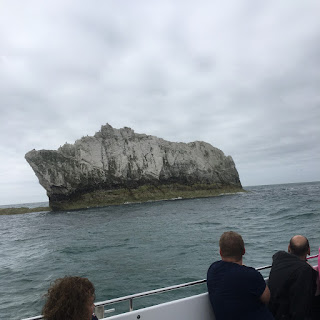 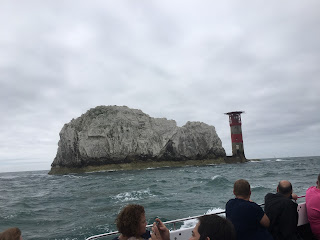 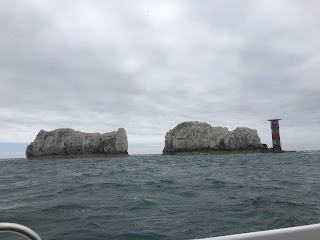 And here they are! There used to be one spiky tall lone rock between the two big ones which is where they get their name from. This apparently was also known at Lot's Wife. 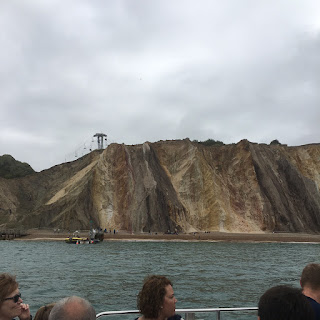 Going back now towards the beach 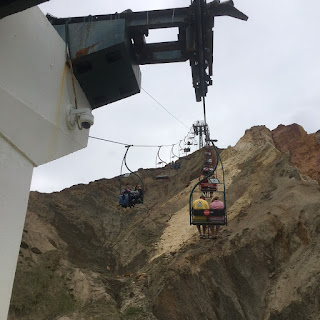 And here we go back up. I'm usually okay going up but I really wasn't feeling it! You can walk down 188 steps to get down and up, too, if you can't go on the chairlift. 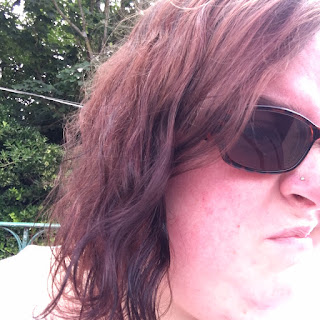 People pay good money for beach waves like this!

After the Needles we drove to Cowes, where we were spending the night. We stopped off at Fort Victoria for lunch. We didn't look around much and the food was pretty basic, but the view was good: 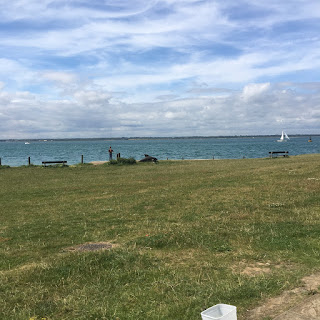 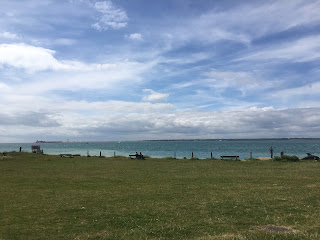 By this point it was gloriously sunny and I definitely soaked it up a bit.

I'd booked us into the Best Western right on the seafront in Cowes. I'd booked a twin room but they'd upgraded us to a room with a sea view. It had a super king size bed so even though we had to share we were miles apart from each other. The room was really hot and we were sweaty and boiling, so we had the ceiling fan on and the window wide open and we rested for a bit. It was lovely! I even had a nap. The hotel was lovely and I'd recommend it. 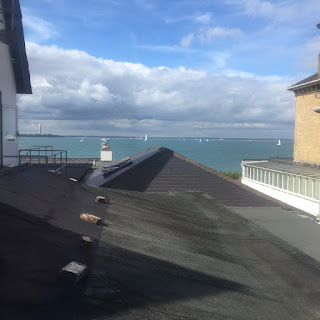 The view from our room window, isn't it lush?

We went down for tea at around 8pm I think? The hotel was full of old people sitting indoors, so we sat outside on the terrace to eat. It was nice enough food. The sun started to set, which was lovely! 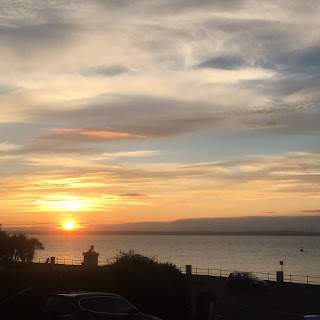 We both took a bunch of sunset photos 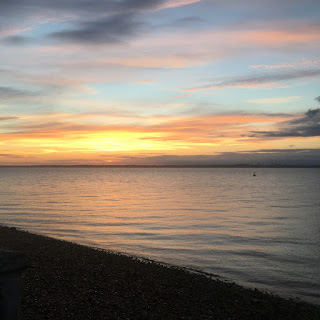 Then after we'd eaten we walked across the road to look at the beach and the sky, which was stunning 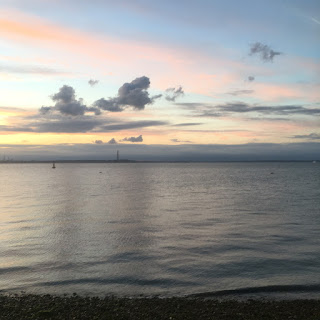 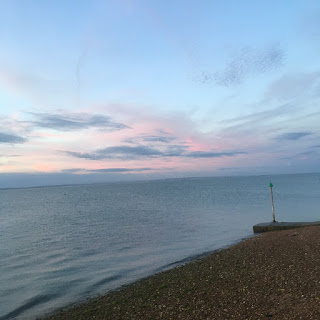 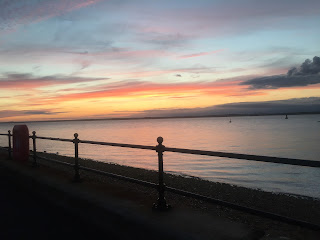 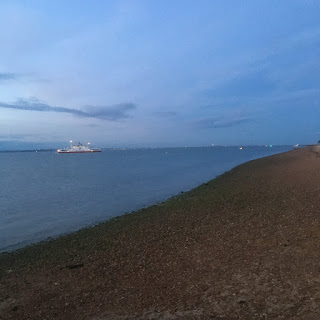 Here's the Southampton ferry coming in 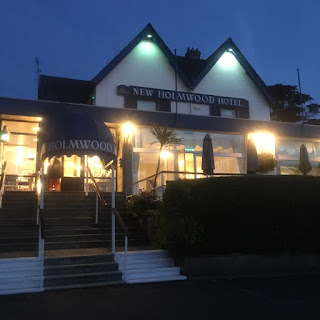 And here's the front of our hotel in the twilight. I loved it for the view, so I would definitely go back!

Posted by Rebecca at Wednesday, September 06, 2017