It was my Grandma's 90th birthday on the 19th of April. That's quite an age, isn't it?! Can you imagine the things she's seen and lived through? Incredible. She still lives by herself and is as sharp as a tack. She decided she wanted to go to Duchniak's for a meal on her birthday, with my mum, stepdad, me and Lee. She's been before and enjoyed it, but the rest of us never had. I don't even think I've had Polish food before, so I was interested to try it!

I didn't take any photos during the meal because I felt it was rude at that particular table, To start with my mum and I shared the meat pierogi, which are soft dumplings and look a lot like steam Japanese gyoza. The meat was nicely seasoned and we both enjoyed them.

For main course I had the beef meatloaf and chips, and a leek salad. The beef came served like two burgers, which were very substantial and also nicely seasoned. The leek salad tasted a lot like coleslaw and was really yummy!

For dessert I had a baked cheesecake which was very cake like in texture - it was the worst part of the meal for me personally; I didn't like it much although Lee really did!

The restaurant is really nice decorated inside and the waitress was really lovely. I'd definitely go back - the cheese pancakes caught my attention so I'd like to try them! 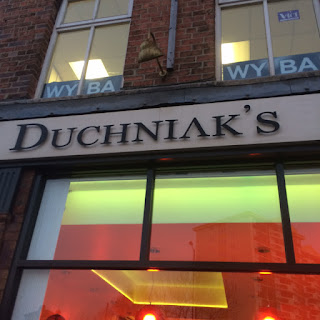