So you may know that I'm a writer with a passion for Young Adult novels; I'm currently writing my own for my MA. I read a lot of YA stuff, so I have of course heard of David Levithan. This was my first time reading anything by him, though. This book was recommended to me as part of my collection of LGBTQ YA fiction and I finished it last night. 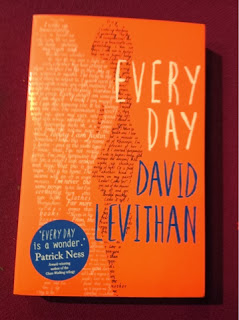 Okay so the basic premise of the book is that A, our protagonist, who has no specific gender and no specific sexuality, wakes up every day in the body of a different teenager. Sometimes they're a boy, sometimes a girl. Sometimes something extraordinary happens, but usually it's just an ordinary day where A goes to school, talks to the teenager's friends and parents, and tries to not disrupt things too much. A is very moral, which is obvious at the end of the book. I actually really like the ending, even though much of the internet doesn't agree with me.

One day, A wakes up at Justin and meets Justin's girlfriend Rhiannon. A falls for her pretty badly, so over the next few days they go back to see her, in different bodies of course. Then they tell her the truth about who they are and the two of them sort of start up a relationship.

The LGBTQ stuff in this book is great. A wakes up as a boy who goes to Pride with his boyfriend, and later as a girl in her girlfriend's arms. One time they wake up as a trans boy. While Rhiannon is straight, she doesn't mind when A turns up to see her as a girl and even kisses them as a girl sometimes.

I'm really appalled that I have to write a 'but' for this novel. I expect better from my Young Adult authors, especially those who are trying be representative of teens' real experiences.

There's a horribly fatphobic part to this novel which, frankly, ruins it for me.

On Day 6025, A wakes up as Finn, who "must weight at least three hundred pounds". A "has been heavy before", but never this heavy. Finn's size comes from "negligence and laziness", he sweats when he gets out of the shower, he is "a sphere of darkness submarining through the halls", he has to take another shower after school because fat people sweat all the time amirite. His best clothes are an XXXL shirt and size 46 jeans and chairs wobble under him. He wheezes in the movie theater.

Usually when Rhiannon sees A, she can see them under whatever the outer looks like. Not today, though. She says "Usually I can. Some glimmer of you in the eyes. But not tonight" and also "When I see you like this, I don't [feel anything]." A thinks this is flattering, in some eyes. Their real soul clearly isn't a fat person, because ewww. They don't kiss each other on this day, and they don't hold hands in the cinema. There's no way, obviously, that Rhiannon could be attracted to this fat boy. No one 'normal' could be.

I'm disgusted at the author, frankly. I think this is so clumsy and so terrible to fat teenagers who might be reading this book. I actually put it down in shock and wasn't sure whether to continue, and I'm 30 years old. A more fragile psyche may be permanently damaged and I think YA authors have more of a duty to teenagers than that.

Finn, the 300lb sixteen year old, is as worthy of love and affection as anyone else.
Posted by Rebecca at Saturday, November 22, 2014