Hanging out with Sarah

I wanted to write about an evening with my friend Sarah at the end of January, because I had such a lovely evening even though I was feeling so crap.

I picked up some kind of virus in Scarborough, it was horrible. I felt like I had flu - exhausted, all my limbs aching, headachey and tired - but I didn't have any cold symptoms. Two nights in a row I went to bed about 9.30 because I was just so tired. Lee had it too, it was nasty. On the Thursday of that week I'd arranged to go to my friend Sarah's house. At first both Lee and I were going to go to chill out with Sarah and her husband Tom, but then Tom was working away and Lee had band practice.

I struggled through work on Thursday, doing just what needed doing and coming home by 2pm. I considered cancelling on Sarah, but I wanted to hang out with her and we also needed to swap birthday presents. So I decided I would go, but messaged her to say I wasn't well and that I would go in my pyjamas. That meant I didn't have to get dressed again, and I knew she wouldn't mind. I put my shoes and hoodie on in the car, because it was cold, and I took Lee's blanket to snuggle under. I also took wine. Sarah was also in her pyjamas, and we ordered pizza from Dominos and drank wine and watched Emmerdale. It was really lovely - no pressure on either of us to be at our best, but we were in company rather than both sitting at home feeling under the weather.

I really appreciate having friends to whom I can say "I'm coming in my pyjamas" and know that it's okay. If you ever need to do the same to me, it is always acceptable to wear your pyjamas in my house.

Sarah bought me this tote bag, isn't it great? 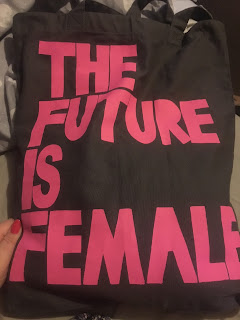