Ivy came to live with us almost ten years ago when she was around 18 months old. We live on quite a busy street so she has been an indoor cat. We weren't even sure if she'd ever been outside and she has mostly not been bothered with open doors and stuff. She got out into the back yard that we share with neighbours once and was thoroughly scared, and she doesn't like rain so she never tried to get out. Our front garden is raised up from the road and the wall at the front of it was broken when we moved in twelve years ago and the garden was in a mess.

We finally got the wall mended in 2014, and then my stepdad put up the fence and gate for us, and then a few weeks ago we had some turf put down. Lee has been using the front door for a while as his car is parked on the road, and Ivy at first was quite suspicious of that - she spends a lot of her time on the living room windowsill which is very wide for lounging on and very warm for sunbathing. But she got used to it, so last week we decided to take her out into the garden.

The neighbours have freedom of access across our garden due to the odd way the houses are set out, so there's a gate at each side of the garden, and low fences at either side and on the front. Ivy has a lead and we took her outside on it and sat on the grass with her. To begin with she was a bit skittish (she is quite a neurotic cat to be honest), especially at the loud noises like busses going past, but she was okay. That was Sunday 7th August.

On Monday, the weather was so lovely that I took her out at lunchtime and read my book while I ate my lunch outside. She was exploring a lot more and settled down eventually. Since then we've had her outside every day and she's really happy and has even been sitting on the mat scratching the door asking to be let out! I'm really proud of how well she's done and I've been soaking up some sunshine too. Plus, when Lee's been with me, we've enjoyed just sitting on the grass chatting to each other.

It'll be a shame when the weather turns, although I suspect Ivy won't be bothered about going outside much then anyway! 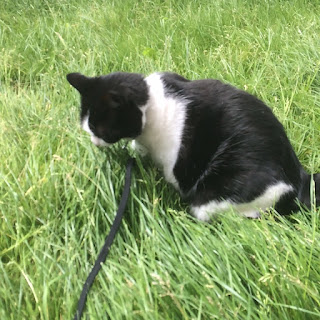 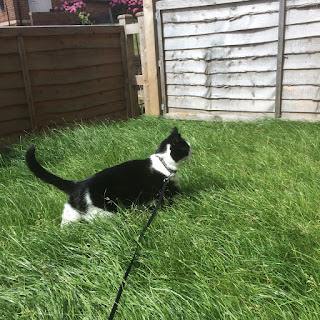 Exploring. We've blocked up the fence in the corner there where she could have got through. 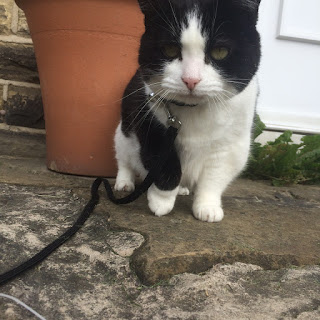 I was lying on the grass watching her roll around on the path and took this very cute photo. Love her!