Trip to the Theatre

In February I went to the theatre with my friend Ruth to see Everybody's Talking About Jamie. It was at the Crucible in Sheffield which is one of my favourite theatres as it's "in the round" - the audience surrounds the stage on three sides. It's also where the snooker world championshop is held every year so you've probably seen it on the TV if you've never been.

I'd seen a bit about the play but didn't buy a ticket, and then Ruth had a spare one so I was able to go for free, which was very much appreciated. I knew it was about a drag queen but hadn't read anything else about it which was actually lovely because it meant that everything was a surprise as it happened. It was the opening night which meant that the writer and director were in the audience, which added to how good it was.

It was inspired by a documentary called Jamie: Drag Queen at 16. It's set in Sheffield and is about Jamie, who is about to finish school and who is, according to a psychometric test, suited to life as a fork lift truck driver. But sometimes he likes dressing up as a girl, and he wants to go to prom in a dress. His mum gives him a pair of platform heels for his birthday and Jamie goes to a shop for drag queens to buy a dress, where he is persuaded to perform as a drag queen at a club. He's bullied by some kids at school but has a supportive mum, surrogate mum, and friends.

The play has musical numbers too, and all were brilliantly sung and staged, and were really catchy. I love seeing how plays are set, and the stage was vibrantly lit for this which was great. The singing and dancing were really fabulous and I really enjoyed the whole thing. I wouldn't be surprised if they make this into a film sometime soon... 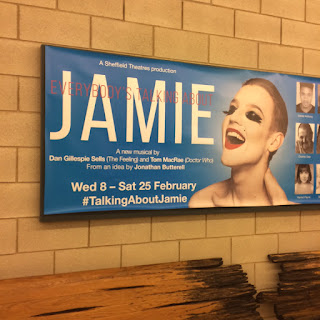