Tea Out with a Friend and Trying Contact Lenses

A couple of days after Lee's birthday I had a busy week, I picked up a temporary job so did that on Monday, and then on Tuesday I had to get up early to go to Specsavers to get a free trial of contact lenses.

I wore monthly lenses when I was in my teens, and then again in my twenties, but I always struggled with screens while wearing them so eventually I just gave up. But recently I'd been thinking that I would like to wear fun sunglasses again, so maybe I should try lenses again. 30 pairs at Specsavers costs around £30, which seems fine by me as they'll last me way more than a month.

I went into the shop and was asked to put the lenses in, which was fine. I was surprised by how clear everything was - I could read the very bottom line of the eye chart. The optician said they looked good, so off I went. I didn't want to take them out so decided to test drive them all day. I did some work and they were fine, and then I was upstairs on my own computer and they were fine too. I was meeting my friend Laura for tea so I wore one pair of sunglasses to drive across to meet her. By the time I got home around 7.30, my eyes were tired, but I was also tired, and I had been wearing them for 10.5 hours at that point! I was so impressed though.

I recently got some more slip on Converse from eBay. I love my black ones so much and noticed that there were other patterns available (I really want some white ones!). I bid on these on eBay and got them for just over £25 I think. These floral ones aren't yet as comfortable as my black ones but I'm hopeful they'll stretch over time. I was also wearing this dress with fans on from Simply Be, it's absolutely ancient but I pulled it out again. I love the pattern on it so much and it's very easy to wear. 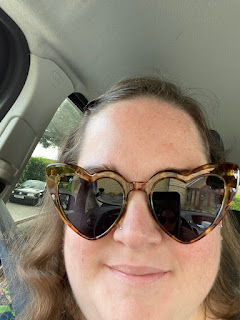 Waiting for Laura in the car wearing these ridiculous heart shaped leopard print sunglasses, they were from Matalan and were less than a fiver! 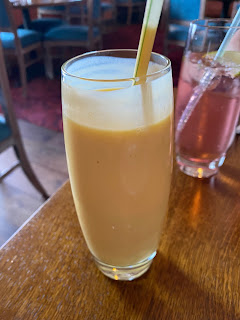 Laura and I met at Prashad which is a totally vegetarian Indian restaurant in Drighlington. It's so worth going, it's delicious. I've been a few times. Lee and I got a takeaway in lockdwo and they weren't doing the mango lassi, so this time they are so I had to have one! 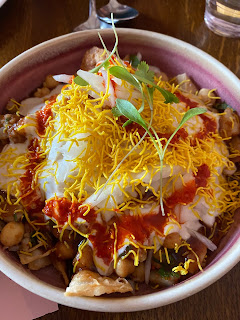 I had chaat to start with which is so spicy and delicious and served cold. I only ate about half because of the spice level 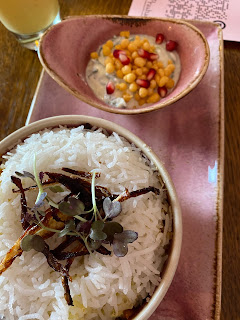 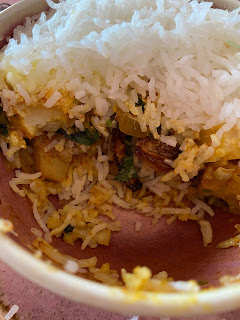 Look at all the layers in this! Gorgeous. I brought half of this home too 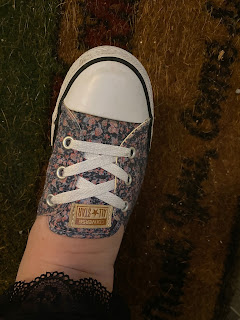 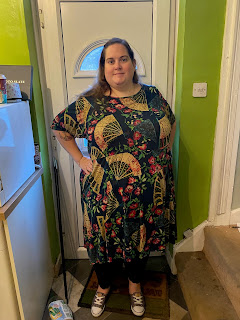 And here I am in this Simply Be dress, wearing my contacts still!
Posted by Rebecca at Sunday, October 17, 2021