What I wore 14th August

In the middle of August Lee and I had a nice morning out in Penistone. We live not too far away and we really like going to the market. It's been a little small in the pandemic, but there's always a cake and bread stall, a vegetable stall, and usually a cheese stall which also sells amazing butter. Lee said we should go, and we had also been meaning to go to the Art House Deli cafe for breakfast, and I wanted to pop into Tesco, so we decided to combine all those things. We set off a little bit later than I would have liked because I slept in, I needed to sleep!

We went to the market first because we weren't sure what time it packed up. We got some sourdough bread and some fruit and vegetables from that stall. Then we bought butter and I got twp types of cheese: smoked feta and a pecorino. She gave me a sliver of that to taste and while it's quite strong and verging on too strong for me, I liked it so decided to buy some. Mission accomplished!

We then drove round to near the church where the cafe is, because we weren't sure what time they stop serving breakfast. They actually do it all day. We both had a veggie breakfast and a hot chocolate, and it was all very delicious and nice!

We then went back to Tesco. I haven't been in a supermarket for weeks, so I picked up some snacks, some wine, and some interesting Malibu drink that should be nice!

We got home and made some mulligatawny soup that we were planning to eat for tea with the fresh bread and butter and cheese. It was pretty easy to do. We cooked it then left it for later, when we blended it and reheated it to eat. It was nice!

I was wearing my La t-shirt with my flamingo skirt that was originally a dress. It was from Lindy Bop originally, who I understand have gone under. That's a shame. Plus size retailers just seem to get fewer and fewer... 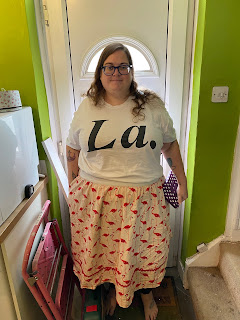