Nails of the Week - Barry M

I've recently been painting my nails a lot more. They all broke over the summer and were all different lengths so looked pretty ropey when painted, so I didn't bother. But then they grew again, as I remind myself that they do do when I break one!, so I've been painting them again. You've already seen the green polish I wore in Ireland. A couple of weeks later I broke out this Barry M polish.

It's one of the Aquarium collection, which I really liked. I have three of them I think. This one is called Arabian Nights. It's green with a blue flash. I actually thought it was the blue with the green flash, but not to worry, it's still a gorgeous polish!

This is three coats with no topcoat, it's pretty opaque. There's a few brush streaks which might annoy some people but I don't really mind! 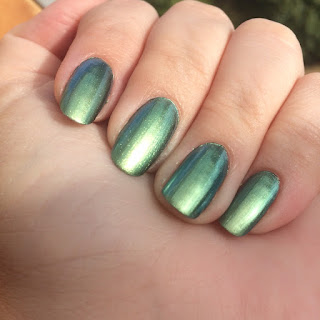