I last had some glasses over three years ago so I've needed some for a while, but the cost is so prohibitive that I've been waiting probably a year to replace them. Then I had the choice taken from me because I got up a couple of weeks ago, put my glasses on, and the right arm dropped off. Whoops.

I went to work with them sellotaped together like Jack Duckworth, That afternoon Lee and I went into Specsavers with me wearing my sunglasses inside. I bought my glasses from Specsavers originally, and have been a customer there for about ten years. The sales assistants told me that the spring had broken in the hinge of my glasses, and made me an appointment for more than two weeks hence.

And... that was it... I was like, so what do I do in the meantime??? And they just sort of shrugged. And then said "Don't you have any other glasses???" Well, no, not when they cost me almost £200 per pair I don't. (I have a very complex lens, due to extreme shortsightedness and non-spherical eyeballs). I felt they were rude for no reason and made me feel worthless.

So I had my eyes tested at Boots and ordered a new pair of glasses there. They would have been ready earlier than the Specsavers ones, but due to being on holiday I had to pick them up two weeks later.

I'm not used to them yet - they feel really huge on my face! My other ones were a lot smaller but it seems like the fashion now is for bigger frames. I love the colour. The prescription is stronger so everything looks a bit weird, but I know I will get used to them eventually! 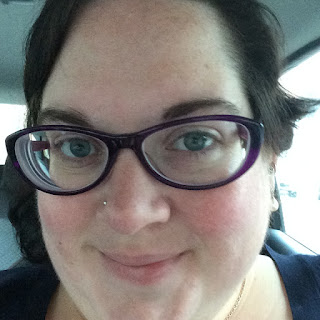