I've seen on Twitter before about blogger meet ups for Yorkshire bloggers and have wanted to go. They're organised by Fran at A Style Creative and when she set up a date for the end of October I jumped at the chance to go.

It was held in the new Victoria Gate centre in Leeds, which had only opened a few days earlier. The centre has a huge John Lewis and is really fancy, I liked it and I'd like to go back and look at the rest of it. It links to the Victoria Arcade and the back of Harvey Nichols, which is nice, and it's got a huge car park which is a boon for that edge of Leeds.

We went to Le Pain Quotidien, which is a London based chain and this is the first one in the north. I think I've eaten in it in London, but I wasn't sure what to expect. I liked the decor - cute writing on the wall and nice, casual wooden tables. There were seven of us, and we were seated in the middle of a long table which was perfect.

I chose the vegan chilli which came with guacamole and soya sour cream, and two hunks of bread. It was really nicely spicy and I'd definitely order it again. With this I had a hot chocolate, which was also delicious. It came as a cup of hot milk with a little jug of warm chocolate sauce to pour in, it was yummy!

We chatted lots which was just as well as the service was, I felt, a little slow. It was packed, but it felt like the staff were out of their depth a little bit. But, we had time to sit and chat.

For dessert I chose the scone with jam and cream, and also had a glass of raspberry lemonade. The lemonade was beautifully sour with a hint of mint, and the scone was hot when it got to me. It was also really yummy!

I made an effort and did both my hair and make up, here's my face: 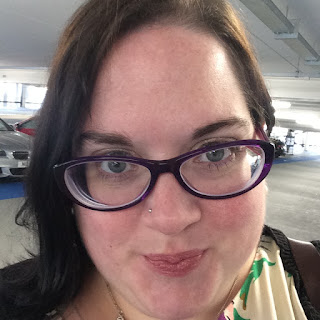 This recipe book was standing up in the middle of the table which was really cute but impeded conversation a little bit! 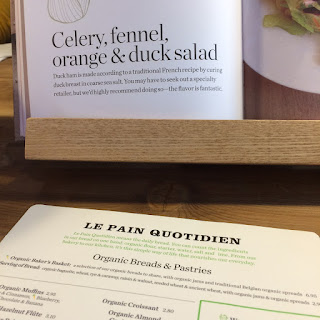 This is my chilli with the cup of hot chocolate in the background. As I said, totally yummy 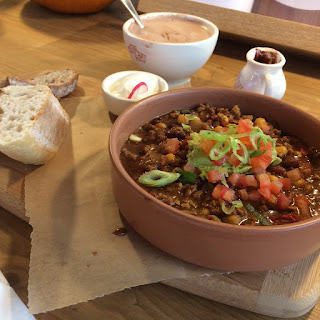 This raspberry lemonade was really nice 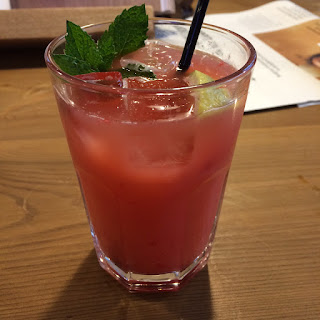 And here's the really yummy scone 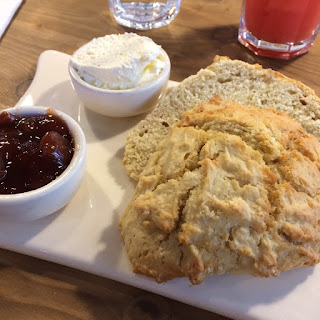 I'll definitely visit Le Pain Quotidien again - I'll have to take Lee as I think he'd really like it.

Email ThisBlogThis!Share to TwitterShare to FacebookShare to Pinterest
Labels: blogging