I bought Lee the Green Roasting Tin book for Christmas, I think, because it looked really good. It's full of vegetarian and vegan dishes that are all done in, you guessed it, one roasting tin. For us that's really useful because it's easy and requires not much setting up or cleaning up. We both went through the book marking recipes we liked the sound of. Some of them are a bit too nutty for Lee, including this one. It's supposed to have cashews on it. However, he liked the sound of the rest of it, so we decided to just leave the cashews off.

It's the sticky Thai rice recipe if you want to look at it in the book. We used sweet potato and broccoli, because neither of us likes squash. The rice is pretty nice by itself, but the dressing lifts it. It's tart, sour, a bit sweet, gingery - it's yummy! I really liked it. We had this with Quorn chicken nuggets.

I've been vegetarian since the New Year. I've had smoked salmon a few times, and tuna once. I think that's fine! I've really wanted it, and have enjoyed it when I have. My friend Chloe told me to stop worrying about it in July, so I did, but since then I've had no fish either. I'm finding vegetarianism really easy, by and large. I'm lucky because Lee is really on board. He hasn't eaten red meat ever since I've known him, but he really likes chicken and tuna. He would find it hard to go completely vegetarian because he doesn't like cheese, but he has tried so many more new things this year. I am enjoying myself currently, so I'll keep going as a vegetarian until I'm not!

We will definitely make this again because it was so nice! 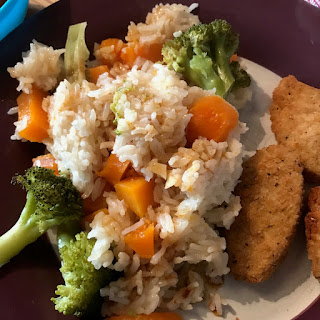 Email ThisBlogThis!Share to TwitterShare to FacebookShare to Pinterest
Labels: cooking