On the Friday that Lee was off, the weather was forecast to be lovely and sunny, so I said we should go to Hathersage Lido. It's about 45 minutes away from our house, a nice drive over the countryside. It makes it a nice day out that's not too far away. We set off around 11, stopping on the way to buy lunch. The afternoon public session doesn't start until 1.30 so we went somewhere nearby to eat lunch. I was lying on a picnic blanket in the sunshine reading, it was lush. We got into the pool at 1.30, got changed and then got in!

The water is heated, and on a day like that - around 22 degrees outside - it's a really nice swim. There were quite a few people there which surprised me. There's two lanes for lane swimming and then a more general area. I think I said before though that it gets deep quite quickly meaning you have to swim or tread water for quite a while.

We had loaded up on sun cream which was just as well because it was sunny. Lee still managed to burn his back a bit though. The public session ends around 3.30 so we got out, got showered, and left around 4pm - they weren't in too much of a rush to get rid of us. We had decided to get tea out after swimming, so ended up in the Ladybower Inn right on the reservoir, where I actually went in June with Sam and Jacqui. We sat inside as we'd had quite enough sun for one day by then. Lee went for fish and chips and I had a halloumi and mushroom burger like before, it was delicious.

After that we just went home, we had had two busy days out but I'm so glad we'd been able to go swimming in the sunshine - it felt so luxurious and nice! They're going to refurbish the lido over the winter so I can't wait to go back and see how it looks next year! 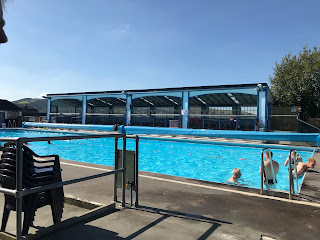 The beautiful and stunning lido 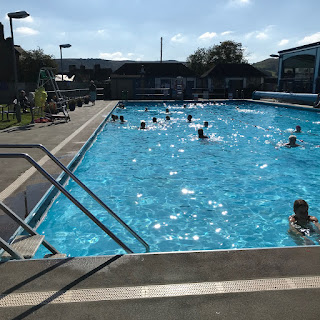 And later, a bit busier. I hope they do something with those steps, they're really bad for me to get in and out of!