What I Wore 16th September

I went to craft club on this Monday morning, and then drove over to Huddersfield to go to the cinema with Sam. At craft club I was making a Christmas present and then did a bit of cross stitch too. There weren't many people there, it was very quiet. I had stopped on my way to craft club to buy lunch, so I ate it as I drove over. I met Sam just before the film started and got my ticket. She had got pick n mix for both of us which was nice!

We saw The Big Meeting, a documentary about the Durham Miners Gala, held every July, and which is also known as The Big Meeting. Lee used to go when he was a kid and some of his family still go now. The documentary is really good - it's got a lot of history, it follows some people going to the meeting today, and it's really evocative and emotional. There's quite a big section on mining banners, which are something I love. They have so much art and craftsmanship in them, and always contain so much history and background. I would love to read more about them! I would recommend the film utterly, if you're interested in history and socialism and all of that stuff. It's great!

I was wearing this top, which I tie dyed on holiday. I clipped a peg in the middle and swirled the fabric around, then tied it together with cable ties into a kind of donut shape. I dipped it in the pink and yellow dyes, and this is the result! I love it, I think it's really pretty and the pattern is gorgeous. I love that about tie dyeing, you never quite know what it'll look like and that's half the fun. It's brighter in real life than it appears in this photo!

My hair looks a state, too, but you know, keeping it real and all of that. 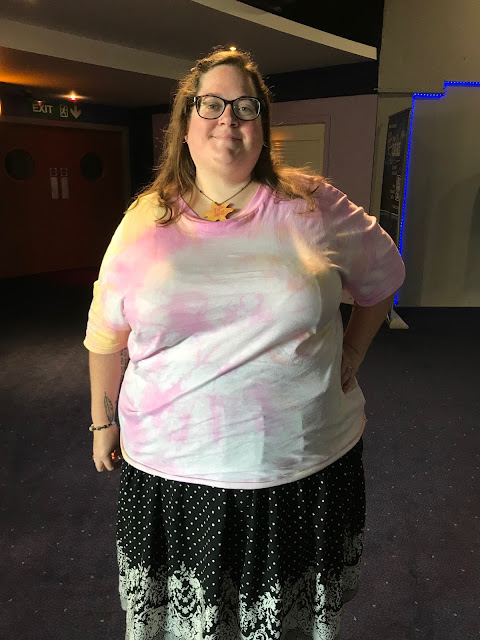 Email ThisBlogThis!Share to TwitterShare to FacebookShare to Pinterest
Labels: handmade