Birthday Afternoon with my Family

My stepdad's birthday is in the middle of December, so the weekend following it I invited my mum, my stepdad, and my grandma over for lunch on the Sunday. I wasn't sure what we would cook, but then I thought about it for a couple of weeks, and decided I wanted to do some of those platters that I see all over instagram.

They're a bit more difficult to do with vegetarian food rather than slices of meat or salami, but I asked my friend Mel on Twitter what she would do, and she came back with some great suggestions. Lee had no idea what I was talking about so I told him to google it for inspiration.

We ordered some stuff to be delivered from Sainsburys a couple of days before. We got three types of cheese, including a white Stilton flavoured with spiced rum and raisins, crackers, Boursin, mushroom pate, olives, vegan sausage rolls and Quorn picnic eggs. I decided to buy some tuna pate and some smoked salmon trimmings for the meat eaters, and served them with some wraps and also some egg mayonnaise. I warned my mum that it wouldn't be hot food, but would be substantial enough for us.

I spent ages faffing with three throwaway platters to make everything look good. We moved the table and opened it up from square to rectangle to make it big enough to hold everything. I had also made myself a table runner out of a really kitschy Christmas cookie material that I found in a fabric shop in October. I love it - it's so over the top!

I had prosecco for me and my mum, and also peach nectar which we both like in prosecco, which I bought from the international supermarket in Sheffield the previous week. My mum was happy about it too!

Everyone enjoyed the food and helped themselves. Everyone tried the vegan sausage rolls and said they were good - I think they're really like meat ones, myself. For pudding we had a chocolate cake with either cream or custard.

My family stayed all afternoon. We were chatting and then did some quizzes. At one point we heard a helicopter and thought it was the police one, but then it was really really low over our house and it became clear it was landing in the field across from our house and was the air ambulance! Two ambulances turned up on the road opposite our house and the helicopter took off again pretty soon. I hope everyone was okay!

I was wearing my rose decorated Yours top and my Sprinkle of Glitter skirt. I don't wear the skirt often because it always feels too fancy, but it's perfect for a Christmas outfit! 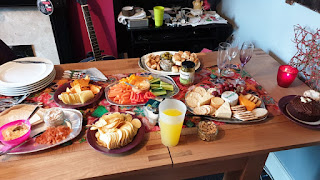 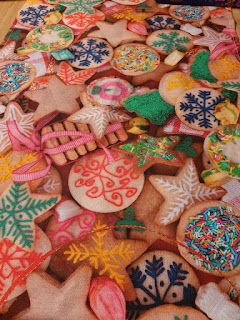 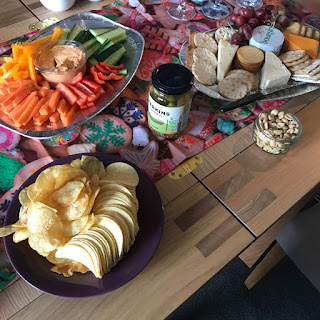 Cheese platter on the right, vegetables and dip, and plenty of nibbles 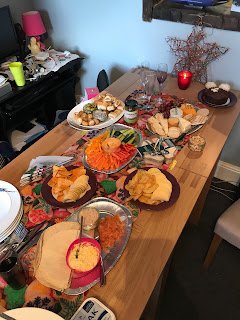 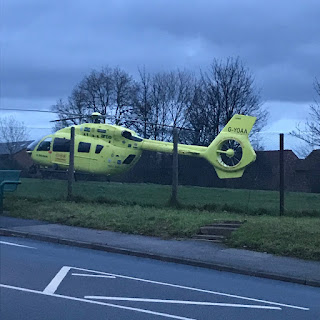 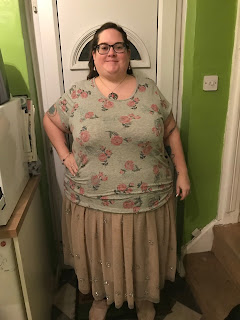 And finally my outfit!