Lee and I have been baking a lot more in lockdown, mostly because we've had a lot more time to, and we've enjoyed having nice things to eat in the house. I saw everyone baking bread and I wanted to do the same, but we haven't been able to get yeast anywhere. We've been in quite a few shops, and we had asked around at the market too. A friend told me about a place in Barnsley where you can weigh your own stuff, so I even asked them, but they didn't have any either. In the end I bought some off eBay, which proves you can buy literally anything you want on eBay. It was probably more expensive than in a shop, but it had free postage and it arrived quickly.

It also came with a recipe for bread, which looked really simple, so we baked it one Sunday morning. It was just flour, yeast, sugar, and water. You activated the yeast with some of the water and the sugar, and then added it to the flour. The recipe said to use your hands to mix it in, which I did. Lee is funny about stuff on his hands, so didn't want to get involved in that. Then you had to prove it for twenty minutes, which we did in the top of our oven. It rose beautifully. The recipe was for two large loaves or four small loaves, but we only had two small tins so we did two loaves at a time. It baked for around 40 minutes and then it was done!

The first loaf was quite dense, so I knocked back the remaining mixture as it had risen while the other was baking, and divided that between the two tins and baked again. I haven't actually eaten either of those yet, but we ate most of the first loaf for lunch. It's nice bread, simple but tasty, although I think I would have added a tiny bit of salt to it. 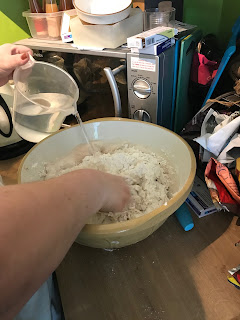 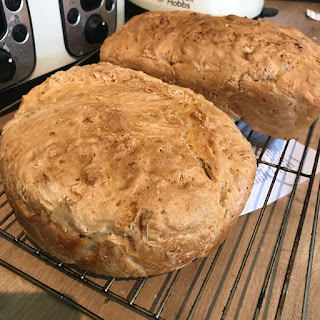 The first two as they came out! 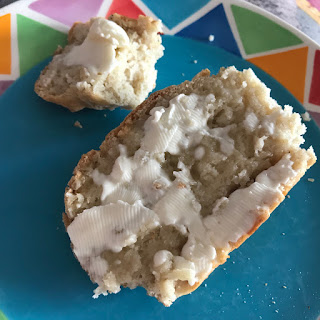 And we just ate it simply, with butter