We had a lazy morning on the Wednesday of our holiday as we both needed showers and needed to sort some stuff out. We eventually set off around midday. We had some leftovers so we stuffed them into some pita breads and wrapped them up with some drinks and headed off to Cannon Hall to sit in the park there. I wasn't sure if it would be open but it was. We walked to some shade under a tree and ate our pitas. It was lovely!

We got ice creams from the van in the car park and then we had to go pick up Lee's car from Wakefield so we drove there. I got home before Lee as he'd had to get some petrol, and he'd also bought two Calippos so we sat in the garden with our feet in the paddling pool. It was so warm, the water, but still lovely. Lee went and put his swimming trunks on and sat in the pool, proving it can indeed be done even though it is very small.

I chilled out for a bit while Lee resealed the bath and some other stuff in the bathroom, something which has needed doing for ages but which we just haven't got round to. It was such a hot day so I laid in the darkened bedroom for a while. I was feeling pretty sad over Ivy's death actually, so gave myself permission to be sad a bit.

For tea Lee had said he would make pan haggerty. It's a traditional north east dish although there are variations. Lee's mam makes hers with the leftovers of Sunday dinner, but Lee makes what his grandma, who was from Northumberland, made. It's layers of potatoes, butter, onions, and cheese. It's not difficult, but it's quite labour intensive, so Lee tends to me it on holiday when he's got time to faff. It's delicious! We had it with fake chicken fillets and sweetcorn. I sat outside in the evening sun while he made it.

I had worn the same dress that I wore on Sunday as it's ideal for the summer, but I had put my chub rub shorts on underneath instead of leggings. It was so hot so I needed to. I got them off Laura, who was getting rid of them but they're from Snag Tights originally. They're a gorgeous greeny turquoise colour which matched the dress perfectly. I have the same shorts in black, but why not go colourful if you can! I'd really recommend Snag Tights if you haven't tried them. 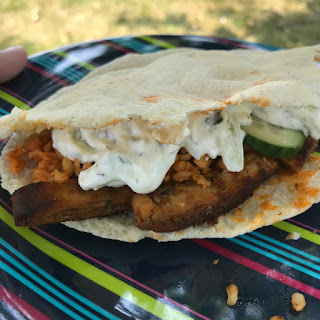 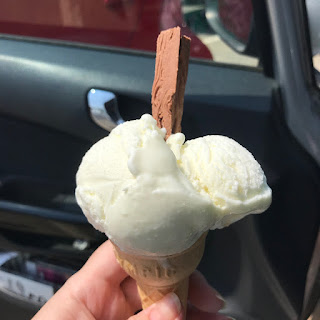 Ice cream in the car 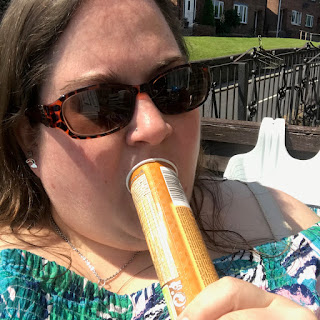 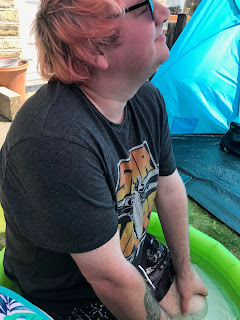 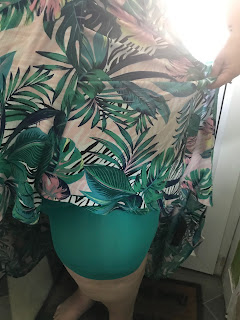 And here's my shorts! They can stretch quite a long way but I was wearing them to my knee which was ideal under this dipped hem