Day Out in the Park

Well, we're still staying at home more or less. We're fortunate that we can both work from home, but we're just a bit bored. Lee had a week off at the end of June. We were supposed to be going to the Cotswolds for the week as it was our 15th wedding anniversary, yep that's FIFTEEN years, but obviously that couldn't happen. But he decided to still take the holiday and we decided we would try to get out a bit and do some things. On the first Saturday we headed to Sheffield to meet up with Bettie and Jen.

Bettie and Jen are both NHS workers and have been working non stop during the pandemic, sometimes on the front line. It's actually really interesting what they've been doing. We decided to meet up in Hillsborough park near their house, so we took our camping chairs and stuff, and bought lunch stuff at the shop on our way. We recently bought a really low table for camping, in the hopes I can use it for working on my laptop outside, so we took that with us. We decided to sit near the pond where we could see the geese and swans. It was overcast but the sun did peep through occasionally.

We had a lovely picnic lunch sharing what we'd each brought, and then had an ice cream from the van. We sat for ages just chatting and enjoying the sunshine. It was really lovely to see FRIENDS, to see PEOPLE in the actual flesh! There were plenty of people about but spread around the park widely, and we of course sat far apart from each other. It was so nice!

I wore this dress, it was originally from everything5pounds and used to look like this. However it then got washed with something that bled into the white and whatever I did I couldn't get the white bright again. So I chucked the whole dress into the washing machine with a packet of Dylon dye in black. I knew the white stitching wouldn't dye, as it's polyester and often doesn't, but I thought it was worth a go. The two shades of black are quite different - the bits that used to be white look indigo or a very dark grey. I was pretty pleased with how it came out and have been wanting to wear this for ages but of course, I just haven't been anywhere TO wear it. So I pulled it on with my Fashion World cardigan which is a pretty nice pink cardigan and was perfect for the weather.

Panorama of the park when Lee and I arrived, before we moved to be near the pond 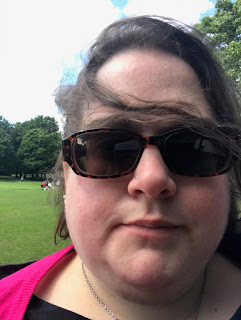 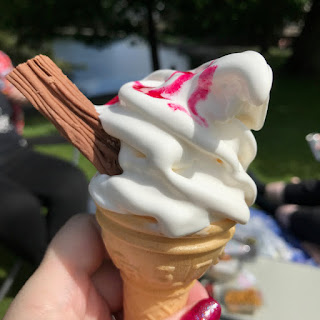 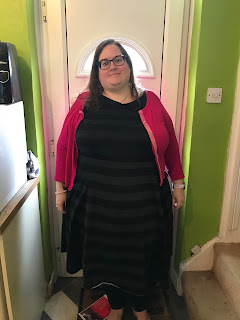 And here's the dress, as you can see the stripes are still apparent, which I think looks nice - although it is unusual for me to wear all black!