I recently finished a big cross stitch piece that I've been working on since Christmas. There's about seventy hours of work in it, which shows how long it takes to make something homemade and beautiful. I bought the kit from Caterpillar Cross Stitch. I've made a few of theirs now, and I really like them because they're clear and easy to do, and they don't have tons of half stitches and back stitching, both of which I really dislike. I love how they look - you can see some of my other makes here on my blog. This was a stitch along last year, but I didn't keep up to it. I started this in January and have been mostly crafting on it since then.

I've got two other kits from Caterpillar Cross Stitch to do - one is called Made to Create and it's like different crafty bits, and one is called Hello Petal and it's the sister to this one, and is for Spring. Hello Pumpkin for Autumn already exists, but I don't have the kit yet, and Hello Sunshine for summer is coming soon! I think I will do all four and put them on the wall together. 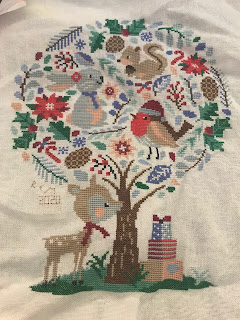 I loved stitching the robin, the rabbit, and the squirrel on here. I didn't like doing the tree, so I did that after the robin and before the rest, so as to get it out of the way. I bought the kit that had evenweaves instead of aida, which is what most people cross stitch on. I love the look of evenweave even though it requires more counting and concentrating!
I also finished this bookmark! Whenever I have a few centimetres of thread left, I sew it on to this piece of aida. I've had this on the go for about three or four years. I'm so glad it's finally finished! I'm going to back it on to some felt I think to stop it fraying any more, and then I'm going to start another one! 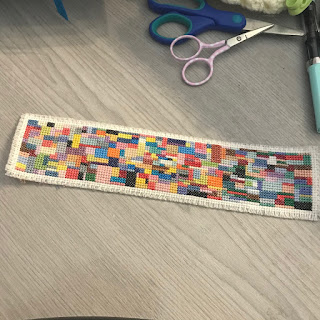