Trip out to Huddersfield

Lee had the week before Easter off, I don't think he had realised it was before Easter when he booked it because he had booked Monday, Tuesday, Wednesday, until my mum and I pointed out it didn't make much sense to go back for one day before the four day weekend. So he booked the Thursday off too, meaning he had a nice long break. Over the weekend we didn't do much. I've got tennis elbow and it's really painful and I had just seen a doctor about it, and the three meds he gave me for it were absolutely kicking my ass. I slept a lot that weekend! Lee is working on painting our stairs and landing, so he did a bit of that, but we mostly had a nice relaxed weekend.

On the Monday we had a relaxed morning playing with the kittens, and I had a shower. Then we set off to Beaumont Park in Huddersfield. I know it's near Lockwood, where there's a Dixon's Milk Ice shop, so I said we should go there on the way back. We stopped to buy sandwiches and drinks, and got to the park. I've never been before but there's loads there for kids to do and plenty of benches to sit on. Plus there was a Dixon's trailer! So we could get ice creams there and didn't need to go to the shop.

We ate sandwiches on a bench. There were a few people around but it wasn't packed. It was so sunny and really nice to be outside in the fresh air. We got tubs of ice cream (and raspberry sauce of course!) and walked around a little bit.

We drove back through Holmfirth because there was roadworks in Berry Brow which took ages to get through on the way there. It was weird because Holmfirth is always packed with people at the best of times, and in the Easter holidays it should be absolutely heaving. But of course nothing is open. It was so weird.

It was a nice little trip out for sure! 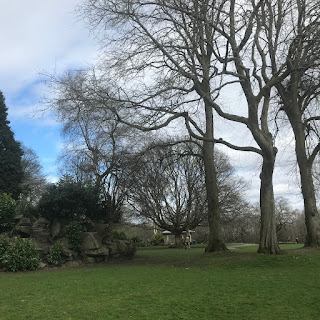 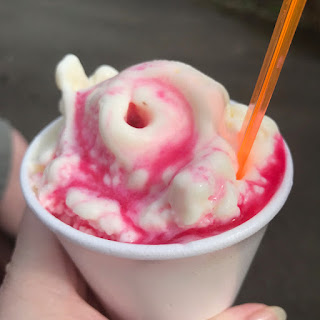 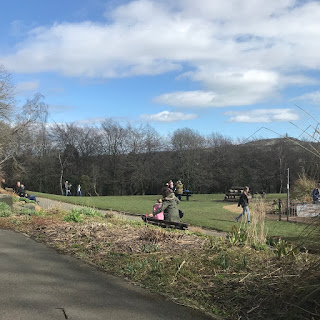 Looking down towards the playground 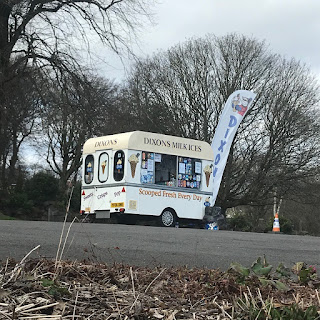 Look at the cute little trailer! The person serving said it's there in the Easter holidays and the summer holidays, which is good intel! 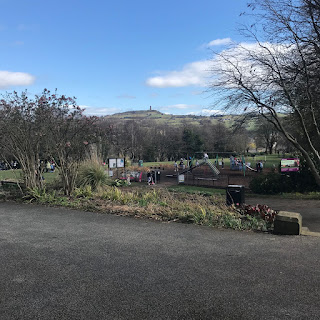 Looking across the park and towards Castle Hill in the distance
Posted by Rebecca at Thursday, April 08, 2021