Popping out to Meadowhall

Lee and I had to pop to Meadowhall for something last week ago, so we decided to go a bit later on in the day. We're not sure how busy it would be around 6pm, so we got there just after 8pm. We went in through Marks & Spencer, wearing masks, obviously. There weren't many people around, but a lot of security guards.

We went into Waterstones for a browse. It was nearly empty and the cashiers were behind perspex screens. I bought four books, on buy one get one half price! Lee got one too, it was £1!

Then across the way from Waterstones was a new shop called Kenji, selling Japanese stuff. It had really cute plushies, stationery, and Japanese noodle cups and drinks. I could have spent quite a bit, but I restrained myself to a new bullet journal, some stickers, and some of that black paper that when you scratch a design off, it shows a rainbow underneath. Lee got a couple of cups of noodles to try, too.

Lee then went to pick up what we'd gone in for, and I sat and read my book while he was gone. It was a bit weird really. I could see the Starbucks downstairs, where there was a huge queue that snaked quite a bit around. There was also a queue for a shop downstairs, but I couldn't tell which shop it was. But otherwise, it was very quiet and a bit weird. So many shops were shut - and who knows if they'll ever reopen - and everyone was masked and keeping apart and there were perspex screens all over. I found it a bit sad really - it's not 'normality' and who knows if it ever will be again.

Anyway, we were leaving after 9pm so we had to go out a different way. It was fine, though. I'm glad I got to browse Waterstones, but it was a bit odd.

The next day two parcels arrived for me. One was my tri-monthly box from A Box of Stories where you sign up for a themed box and get them as often as you like. I get a mixed fiction box every three months. I haven't heard of any of these books, but I like the sound of all of them and am looking forward to getting stuck in to them.

Then Lee had ordered Jagged Little Pill by Alanis Morrisette on vinyl for me. It's one of my favourite albums - I know every word of it. I bought it on tape when I was about fourteen on holiday in France! It was expensive but I've listened to it a zillion times since. I'm looking forward to listening to the vinyl :) 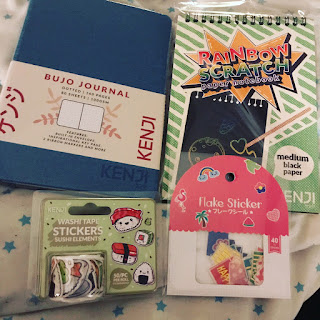 Stationery from Kenji. The bullet journal is dotted inside which is my preference. The paper seems good quality, which is good for me as I use fountain pens a lot 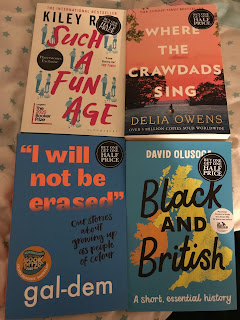 The books I bought. I've heard really good things about the top two, and the second two were in the Young Adult section and looked pretty good 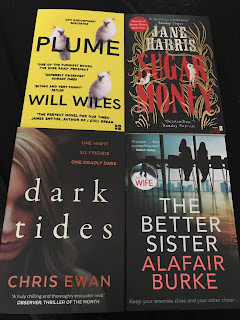 These were my books from A Box of Stories. Sugar Money especially looks good! 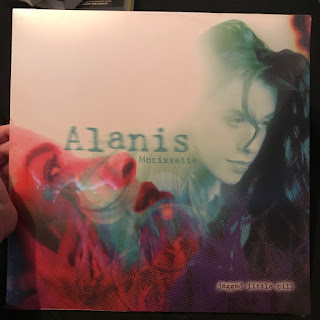 And my lovely vinyl!
Posted by Rebecca at Wednesday, April 28, 2021

Email ThisBlogThis!Share to TwitterShare to FacebookShare to Pinterest
Labels: shopping