So at the beginning of May I banged my car pretty badly on something that shouldn't have been there and it put a huge gash in the passenger side of the car under the door. I could have claimed on my insurance but the prices we got for the repair were almost as much as the car is worth. I didn't like the car very much, either. I had to get it very quickly in 2011 when I managed to write off a car that I LOVED by driving sideways through a drystone wall, and I never gelled with it. Soooo new car it was!

The first two cars I had, including the one I wrote off, were Corsas, and I loved them. The most recent one was a Fiesta, but like I say I didn't like it. So I've gone back to a Corsa, it's silver. I like cars with five doors and this one also has the fitting where you can plug your phone or an mp3 player into the sound system.

So far I'm loving it! 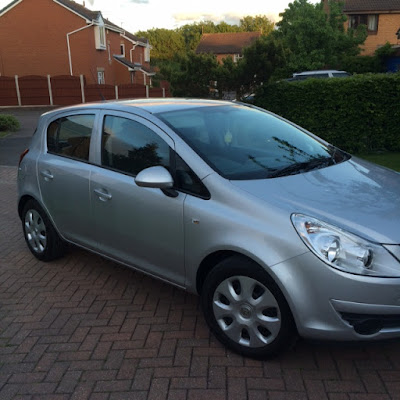 Email ThisBlogThis!Share to TwitterShare to FacebookShare to Pinterest
Labels: car