I love music made by women with guitars and sung sweetly, so I love both Dar Williams and Lucy Wainwright Roche. I got into Lucy about seven years ago - she's the sister of Rufus and Martha Wainwright, daughter of Loudon Wainwright. She's my favourite one, though, even though I love Martha a lot. I got into Dar about six years ago. Sam and I love them both and have seen them both separately a lot of times - I think I've seen Dar 5 times and Lucy 7 times now! So when we heard they were touring Britain together we knew we had to go!

The closest they were playing to us was Otley, which is north of Leeds, but also REALLY north of Leeds, it took us ages to get there. The gig was in a wine bar and we had delicious nachos first and then got a table in the back room where the gig was. Lucy was on first and not many in the crowd knew her, so I hope some were won over! She has such a clear voice, I could listen to it forever. She does a great cover version of Bruce Springsteen's Hungry Heart which she made us all sing along to.

Dar was on second and as usual she told stories about her songs along with singing them. I love this. She started off with one of my favourite songs The Babysitter's Here. She also played a couple of things from her new album, so afterwards Sam and I both bought the CD from her.

Lucy recognised us - when we saw her a couple of years ago she ended up singing Happy Birthday to Sam (who was NOT impressed with me!) - which was lovely, she's so adorable, and Dar told us that she's friends with author David Levithan. It was a great gig! 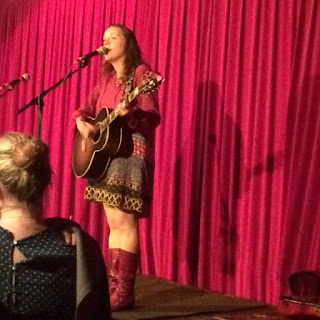 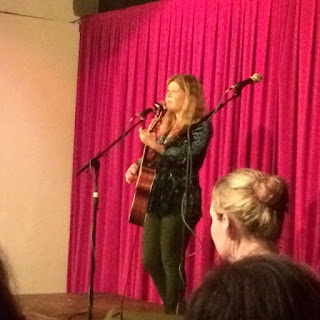 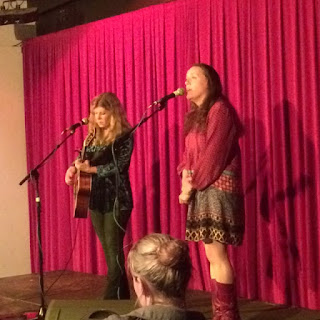 Both of them singing together in Dar's set

This is one of my favourite Dar songs, it's called Are You Out There

I also love her version of Wilder Than Her, which becomes really gay with a female singer

This is my favourite Lucy song and is about a date she went on where her date had a collapsed lung and ended up in hospital! It's called A&E

I also love this song by her, it's called Snare Drum