What I Wore 28th December

Well, Christmas passed in a blur, in a nice enough way filled with family and travelling, but it always goes SO fast and then I find the week between Christmas and New Year really hard to deal with. Lee was off all week though so on the Wednesday we decided we would go to see Rogue One before we went to have curry with some friends. We went for lunch first, paid for with a gift card Lee's mum gave us, and then went to the cinema. We both really liked the film - it was so sad though, especially watching it the day after Carrie Fisher died!

Anyway, I wore this dress that I bought ages ago but hadn't worn in forever. I know it's really bright, but I needed to brighten up the day. I love the colours on it. It's from Lovedrobe but like I say it's a year or two ago. 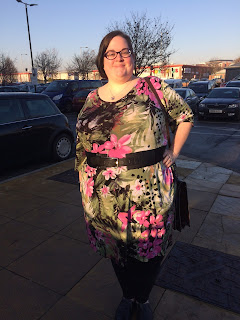 Email ThisBlogThis!Share to TwitterShare to FacebookShare to Pinterest
Labels: lovedrobe