On the 23rd of June Lee and I went to Cornwall for a week. We went in 2014 and had such a lovely time that we wanted to go again. I looked for a cottage but they were all really expensive, so we ended up booking into a static caravan on a holiday park near Mullion Cove on Lizard Point. The park had an indoor pool, an outdoor pool, mini golf, an arcade, and loads of entertainment. Some of that stuff we avoided, but we made good use of the pools. We managed to pick a gorgeous week for the weather - it was in the high 20s every day. This meant that we spent a lot of time sitting on the beach or round the pool, instead of spending time exploring small villages. I think we both needed it - we're making plans already for our next trip to Cornwall!

We set off from home around 9.30am. We made good time until Bristol, where there was traffic on the M5, and we didn't get to Mullion until just before 5pm. Now, Lee and I always like to go swimming as soon as we arrive somewhere, to shake off the car and relax a bit, but unfortunately the pools closed at 4.45 so we had just missed them. So we decided to head down to the beach instead.

We put our swim stuff on in case we ended up going into the water properly. I had a list of things I wanted to do and one of them was to swim in the sea, which Lee hasn't done in years and which I've never done with him. So I didn't want to miss out on an opportunity.

Now I'd been told that Mullion Cove beach was gorgeous, and maybe it was, but we couldn't find it. We ended up going slightly further up the coast to Poldhu Cove. It is a gorgeous beach and there were loads of people on it. There's a stream that comes down, so we paddled in that for a bit and then sat in the fading sun before heading back to the caravan to eat.

We had planned to bake something to take with us, but didn't have time, so I'd gone into one of the cafes in our village to ask if they would sell me a whole cake, and they would! So I ordered a chocolate fudge cake for £10 and we picked it up as we left home. It cut into ten pieces so it was definitely value for money, and it was really yummy too. We would definitely do this again!

We went to bed early because we had been travelling so much. The caravan was really clean and cosy, and the bed was perfect for me! 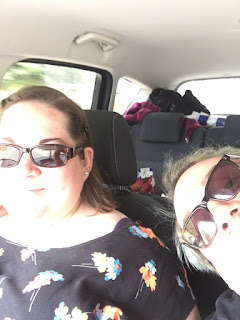 Lee took this as we set off - I drove his car for the first time! 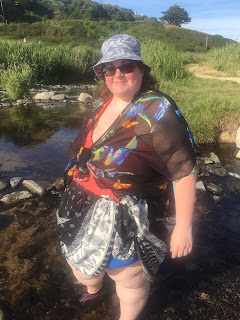 Paddling in the stream at Poldhu Cove, I have never looked so glamorous 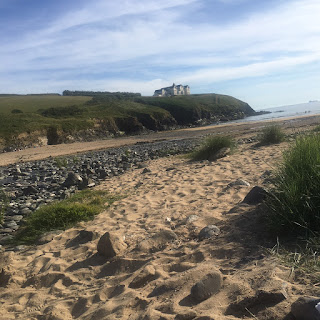 The beach with the stream/rocks in the middle 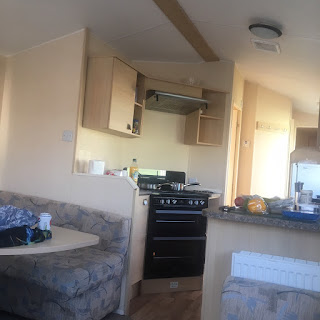 The caravan from the corner sofa. It had two bedrooms which I was glad about - the park has one bedroomed lodges on site but honestly they just looked tiny 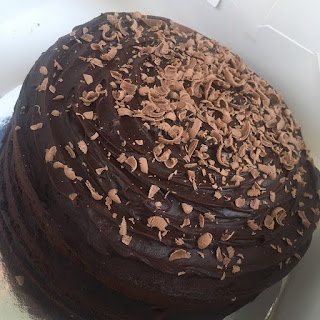 And the cake! I will definitely do this again