I'm showing you today my latest crochet creation. I finished this towards the end of April, but I started it way back in October. I've worked on it on and off, but it took a long, long time. It was some new crochet techniques for me, and those hexagons took me about two hours each! I really struggled to get through those, but when I did, the border didn't take long at all and the edging just took me a few hours. I was so excited to finish it.

The pattern is called the Carousel Blanket and it is inspired by a circus big top. I did the mandala way back in October with my friend Sarah. The middle part is raised, which is apparently an old Irish crochet technique. The mandala didn't take too long at all, I liked it.

The cream and red stripes are all exactly the same, just mirrored. I took the kit with me to Grassington back in November and did tons of stripes then. I didn't understand fully how to attach them to each other and to the mandala, so I did a different technique. I wish I'd stuck with it, because I understood it much better when I was attaching the pentagons. If I could have been bothered, I should have unpicked it and done it again, but I think when anyone else sees it, they won't see any difference. So it's fine!

The pentagons were okay. They had the same raised middle as the mandala. I understood the joining technique and I think it looks really good.

The hexagons..... took forever. They're not even - they're pointed so two sides are longer than the other. I had to count every single stitch and that just really really annoyed me. I usually craft most days, but these were depressing me so much that I only did them once a week at crafy club. I genuinely think I spent two months on sixteen hexagons. I was so frustrated. And then so happy when I sewed the final one in on 25th March!

At that point, the blanket was about four feet wide and I really saw it as a whole for the first time. I started the border, and I was supposed to count that there were a certain number of stitches on each side. I didn't. I had had enough counting by that point. I learnt a new technique for changing colours, which was good. The colours change so much though, meaning there were literally dozens of ends to sew in. Everyone hates sewing in ends! I got through that by doing it while I was video chatting with friends in lockdown. It meant I didn't concentrate very much on them!

The border took a month more or less. Then the edging didn't take very long. I love doing shells. However, I think the number of stitches maybe wasn't right, because I had to leave one stitch fewer in the shells. But, by that point I just didn't care anymore. It looks fine! It really looks perfectly fine to anyone who isn't a crocheter.

I sewed in the final ends and then it was done! I spread the blanket out to show Lee and to take these photos. I can't decide which part is my favourite. I love the colours so much!

I am however really ready to move on to a new project. I always am by the time I finish something. I may do some cross stitch, I may do another blanket, I may turn to another kit that I bought... 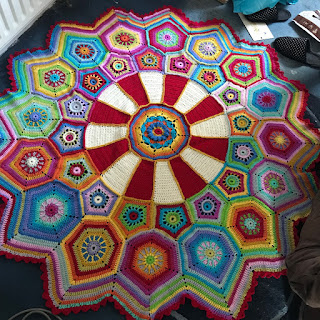 I think the whole is so stunning. I'm really proud of myself! 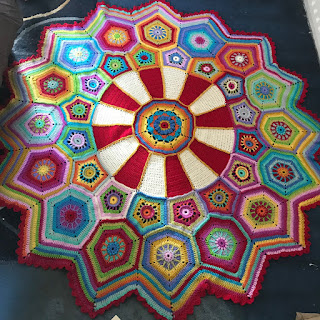 It's about five feet across all in, it's humongous. It wasn't until I was doing the edging that I realised quite how heavy and big it is 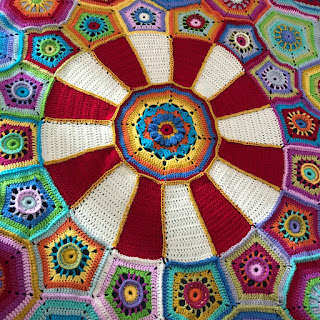 A closer look at the beautiful octagon mandala in the middle and the stripes around it. I'm so glad I made this!