Making Dalgona Coffee while in Lockdown

I'm sure you must have seen people making dalgona coffee while on lockdown. I saw it around Easter and my cousin Rob joined in with the trend and on one of our video chats I asked him for the recipe. He said it was so easy and I was determined that I would make it at some point for me and Lee. So one Saturday in the middle of April I did!

The coffee originated in South Korea when they were on lockdown, although it is also similar to an Indian coffee apparently. It's like an iced coffee, something that I probably get from Costa or somewhere else twice a month and which I am really missing on lockdown! So it's nice to be able to make something similar from home.

Apparently it's something in the way they freeze dry coffee that makes it so foamy when whisked, so it has to be instant coffee you use and not ground coffee. It starts to come together as a foam really quickly! I was surprised as I thought it would take ages. You have to whisk it until it forms "stiff peaks". I wasn't sure exactly what this meant, but the colour came quite pale and it was really foamy. I whisked a little bit longer, but the peaks didn't seem to change so maybe I had got the right consistency.

I poured milk into a glass and then dolloped the foam on top. It was quite sticky and wouldn't come off the spoon very well, so it didn't dollop perfectly like I had seen on Instagram. Oh well, life isn't perfect! Lee wasn't sure he would like it so he had a smaller glass. He decided he probably wouldn't drink it again, but didn't mind it.

I liked it - I used a spoon to stir the foam into the coffee bit by bit. Our milk wasn't particularly cold, so I added some ice cubes and that really helped, it was definitely like a proper iced coffee then. It's nice and sweet - you could reduce the sugar a bit I think. I will probably make it again, and put more ice in. 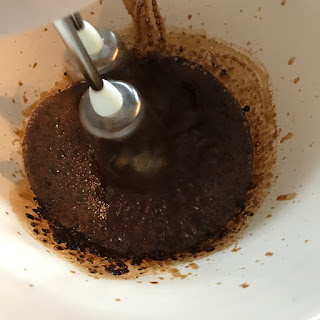 Starting off the whisking 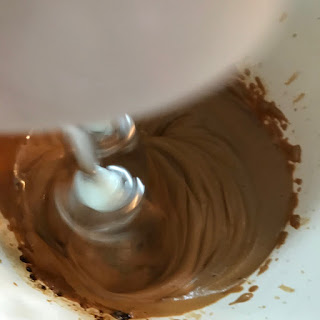 Getting there, but it's not quite pale enough 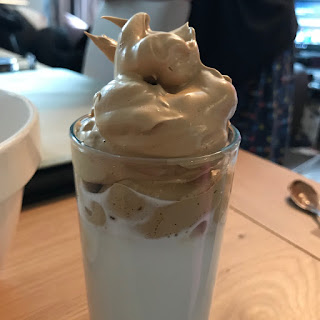