Well, we're still in lockdown. As I write this it's the end of April and I don't think things will be over by the time you read this in aa couple of weeks. I feel like it's become normal now. I'm working from home a few hours a week, and I've had to go into the centre to pick up donations and the post a couple of times, but mostly Lee and I have been staying in. He's been working, but since we were supposed to be on holiday now he had some hiliday days booked. His boss encouraged him to take at least a few days because he hasn't had any time of since Christmas and he's been snowed under with work as his work have merged with a couple of others and everything's been haywire. So he's off work the end of this week. Yesterday he didn't do much; I didn't either, I lay on the sofa and read my book all morning. We're redecorating the attic and it's actually getting done a lot faster as we've had so much time at home, so I repainted a mirror with white gloss paint. We've also been doing jigsaws together. They're not something I do often at all, but it's been a nice activity to do together.

Today we needed to go to the supermarket. We went last week to the Morrison's in Barnsley, and it took over 90 minutes once you factored in queuing to get in and queuing to pay. They're restricting it to only one adult per household, so Lee goes in as I can't manage a big supermarket by myself. I sat in the car and read my book. We didn't fancy taking quite that long this time, so we went to Tesco in Penistone. It's a medium sized supermarket, it has most things you need, and when we got there the queue wasn't too long at all.

Then I noticed that the market hall in Penistone was open! It's an outdoor hall, it has no sides but has a roof. There was a fruit and veg stall, a cheese stall, an egg stall, a pet stall, and a stall selling things like rice and beans by weight. I was so happy! We queued at the fruit and veg stall but picked up loads of stuff - cauliflower, broccoli, courgettes, grapes, bananas, and strawberries, all for just over £10. The staff put items straight in our bag and we paid with contactless card. The cheese stall is one I've seen before at markets like this. I got some Five Counties cheese which I love, and a slice of something a bit like Brie to try. I don't love it by itself but I'm planning on eating it tomorrow on a toastie with some pesto. Perfect! Lee noticed this stall had salted farmer's butter, so we got some of that.

We didn't need eggs or pet supplies, but we did need red lentils and Lee has struggled to find them in any supermarkets. We bought 200g and also some raw cashews which I love. For years people have been asking us all to shop local and while I do try, I haven't done anything like this in ages. I rarely go anywhere with a market, and it can feel like it takes a lot of time and lacks convenience. However, we've all got time right now. Plus it's keeping money in my local area and supporting businesses who may be struggling (which the big supermarkets are unlikely to do, they'll just have less profit than last year probably). I was happy to do it.

Lee went into Tesco and got everything else we needed, but it didn't take him too long at all. He bought a French baguette and we had bread and butter and cheese and crisps for lunch like we were on holiday! 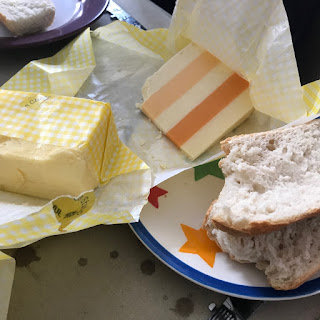