We had to go on a fairly long drive in mid-July, which is something we haven't done in months thanks to lockdown. I like driving places with Lee - he drives and I'm the DJ - so it was really nice to do something normal. We had planned to pop in to see our friends Lou and Si in Lincoln on the way back, but we needed lunch before that, so we went to Pizza Hut and got a takeaway.

I'd heard people rave about the fake pepperoni Pizza Hut does now, so I thought I'd try it. It's available in a totally vegan pizza, but I had mine with dairy cheese and a stuffed crust (cos I bloody love a stuff crust!). It is SO good. It doesn't quite have the texture of meat pepperoni, but it does have the flavour, and it's delicious. The whole pizza was really nice.

We called in to Lou and Si and sat in their garden. The sun was out and it was lovely - we didn't stay long but it was nice to chat for an hour or so. We set off back about 3pm and as it was so hot I got Lee to get us an ice lolly each when we stopped for petrol. You don't often see cola flavoured Calippos in this country so we both got one and they were great. 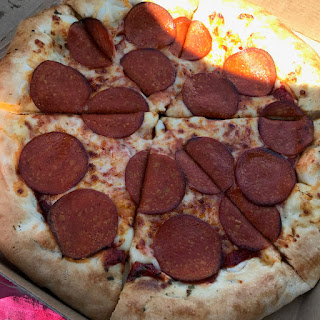 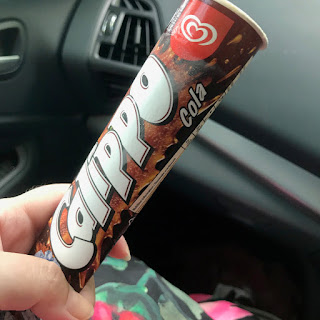 And a delicious fizzy ice lolly on the way home