What I Wore 12th July

Recently we've been to Yummy Yorkshire a few times for ice cream. Their restaurant and parlour were still shut, but they have a little takeaway stand and it's been open since the middle of June, and we've been a few times to get ice cream. They've got portaloos and a marquee thing you can sit in, if those are things you want/need, but I didn't feel like they were safe enough, so we just sat in the car. It's about a fifteen minute drive from our house, meaning this activity took less than an hour, cost less than a tenner, and was good fun and got us both out of the house for a bit.

We decided we'd go one Sunday lunchtime in July. We had had a late brunch (poached eggs and smashed avocado on toast, and orange juice!) and then popped out. However, when we got there it was really busy. There were long queues for the takeaway stand, cars parked everywhere, kids running all over, and even their market was open again. I understand that they want to make money, and I'm not blaming anyone else if they did go, but it didn't feel safe enough for me, so we left. We went instead to Pot House Hamlet, which is nearer to our house. They have a cafe that is usually packed full, and also a takeaway ice cream stall. The stall wasn't open, but they have ice cream inside too. Inside, the tables were set well apart and everything was very clean and ordered, so it felt a lot safer. I would even have gone in and had something to eat had we not just had brunch, because it wasn't busy at all even though it was Sunday. I've said we should go back one day for lunch.

Everyone has different lines and limits in the current climate and I think we just all need to let each other get on with what they want to and let them set their own limits. I am very much going on "feeling" and often that's due to density of people and also how many (if any) of them are wearing masks. We're wearing masks in the shop, although I'm avoiding going into many shops and definitely not the supermarkets. We went into a record shop in Barnsley the other day and that felt fine and pretty clean. Plus it was nice to browse records, it felt really normal!

Anyway, I had a double cone of chocolate and strawberry and Lee had a tub of mint choc chip and chocolate. We sat on a wall in the sunshine to eat them.

I was wearing my blue and purple Scarlett & Jo skirt that I really love, and a plain black top from Simply Be. A simple outfit but a nice one! 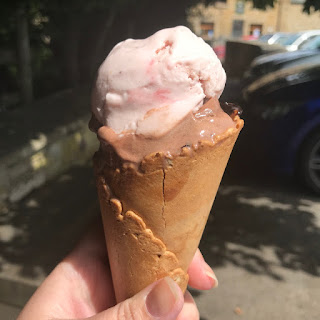 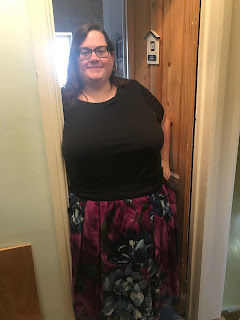 Email ThisBlogThis!Share to TwitterShare to FacebookShare to Pinterest
Labels: scarlett and jo, simply be